Democracy and truth - Sophia A. Rosenfeld 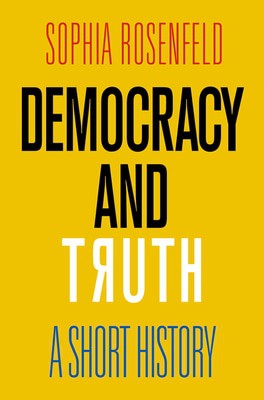 The problem may be novel in some of its details-including the role of today's political leaders, along with broadcast and digital media, in intensifying the epistemic anarchy-but the challenge of determining truth in a democratic world has a backstory. In this lively and illuminating book, historian Sophia Rosenfeld explores a longstanding and largely unspoken tension at the heart of democracy between the supposed wisdom of the crowd and the need for information to be vetted and evaluated by a learned elite made up of trusted experts. What we are witnessing now is the unraveling of the dtente between these competing aspects of democratic culture.

In four bracing chapters, Rosenfeld substantiates her claim by tracing the history of the vexed relationship between democracy and truth. She begins with an examination of the period prior to the eighteenth-century Age of Revolutions, where she uncovers the political and epistemological foundations of our democratic world. Subsequent chapters move from the Enlightenment to the rise of both populist and technocratic notions of democracy between the nineteenth and twentieth centuries to the troubling trends-including the collapse of social trust-that have led to the rise of our "post-truth" public life. Rosenfeld concludes by offering suggestions for how to defend the idea of truth against the forces that would undermine it.

Here's what you say about
Democracy and truth - Sophia A. Rosenfeld.

Sophia Rosenfeld is the Walter H. Annenberg Professor of History at the University of Pennsylvania and author of Common Sense: A Political History, which won the Mark Lynton History Prize.

"An essential guide to finding the roots of our current predicament, this short book provokes thought rather than simply assigning blame and consequently succeeds in the most important task of all: helping us navigate toward a revival of democracy at the very moment when it seems most under threat."-Lynn Hunt, author of History: Why It Matters

"Brilliantly lucid. . . . [Rosenfeld] provides the historical background necessary to understand our current truth crisis . . . [and] few historians are better positioned to tell this story than Rosenfeld. A professor of intellectual history at the University of Pennsylvania, she has devoted her career to exploring the ways that philosophical conversations during the Enlightenment and the age of revolutions shaped basic modern political concepts and presuppositions."-The Nation

"[E]xcellent and . . . elegantly written . . . Rosenfeld's central insight [is] that there never was a golden age; the relationship between democracy and truth has always been complicated, and has never been firmly settled. Rosenfeld shows that . . . the conflict over epistemic authority has been a structural feature of modern democracy since the beginning."Project Syndicate

"In her short, sharp book, the historian Sophia Rosenfeld . . . [argues] that ever since its origins in the late 18th century, modern democracy has had a peculiar relationship to truth: the current crisis merely epitomises that. . . . All the biggest challenges of our time are transnational: mass migration, growing inequality, the onset of ecological Armageddon. It's arguable that the politics of the nation state have become at best irrelevant, and at worst a hindrance, to tackling such global challenges. The outlook is grim. Yet it's a tribute to the quality of this pithy, illuminating book that one nonetheless ends it provoked and inspired, rather than dispirited."-The Guardian

"If you are a citizen concerned and not a little confused about the frantic assault on objective truth in today's United States, Sophia Rosenfeld's learned but extremely accessible book is a must-read. Democracy and Truth explains and reveals the historical and intellectual roots of the tension between the two values named in the title, and it shows that truth can prevail-but never without a fight."-Michael Tomasky, author of Left for Dead: The Life, Death, and Possible Resurrection of Progressive Politics in America

In Democracy and Truth, Rosenfeld reveals how contestations over truth are part and parcel of the history of democratic theory and practice . . . In illuminating chapters on 'the problem of democratic truth,' intellectual expertise, populism in historical perspective. and 'democracy in an age of lies,' Rosenfeld explains how the democratic idea of truth never quite lived up to its promise of influence by persuasion rather than force. This problem at the core of modern democracies seems to be hidden in plain sight from today's political commentators.-Dissent

"A valuable historical guide to current debates about elitism and populism, Democracy and Truth poses the hardest of questions: can we maintain a constitutional government worthy of a free people in an age of widespread misinformation and fanaticism?"-David Bromwich, Yale University

"One of our most audaciously gifted historians offers a deep, subtle, and suitably prickly examination of a newly vexing set of issues. Indispensable. Irresistible."-Don Herzog, University of Michigan Law School

"Surveying the post-Enlightenment era, this incisive account shows that our concerns with "fake news" have a long history, and that democracy and truth have often pulled in opposite directions. Drawing mostly on the American experiment, Rosenfeld analyzes political spin, the idealization of journalistic objectivity, and the echo chambers within which news is either believed or derided. She dives into such eclectic topics as Kant's 'Dare to know!' dictum, lie detectors, and oath-swearing. Rosenfeld's conclusion is sobering: even if the relationship between democracy and truth has long been vexed, the crisis facing Western democracies today is distinctly new."-The New Yorker