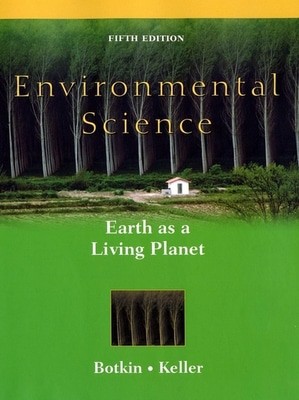 There
s much more to explore online!

Here's what you say about
Environmental science - Daniel B. Botkin.

Daniel B. Botkin
is President of The Center for the Study of Environment and Professor Emeritus of Ecology, Evolution and Marine Biology, University of California, Santa Barbara. From 1978 to 1993, he was Professor of Biology and Environmental Studies at the University of California, Santa Barbara, serving as Chairman of the Environmental Studies Program from 1978 to 1985. For more than three decades, Professor Botkin has been active in the application of ecological science to environmental management. He is the winner of the Mitchell International Prize for Sustainable Development and the Fernow Prize for International Forestry, and he has been elected to the California Environmental hall of Fame.

Trained in physics and biology, Professor Botkin is a leader in the application of advanced technology to the study of the environment. The originator of widely used forest gap–models, his research has involved endangered species, characteristics of natural wilderness areas, the study of the biosphere, and attempts to deal with global environmental problems. During his career, Professor Botkin has advised the World Bank about tropical forests, biological diversity, and sustainability, the Rockefeller Foundation about global environmental issues, the government of Taiwan about approaches to solving environmental problems; and the state of California on the environmental effects of water diversion on Mono Lake. He served as the primary advisor to the National Geographic Society for their centennial edition map on "The Endangered Earth." He recently directed a study for the states of Oregon and California concerning salmon and their forested habitats.

Professor Keller has focuses his research efforts into three areas: Studies of Quaternary stratigraphy and tectonics as they relate to earthquakes, active folding, and mountain building processes; hydrologic process and wildfire in the chaparral environment of southern California; and physical habitat requirements for the endangered southern California steelhead trout. He is the recipient of various Water  Resources Research Center grants to study fluvial processes and U.S. Geological Survey and Southern California Earthquake Center grants to study earthquake hazards.

Professor Keller has published numerous papers, and is the author of the textbooks
Environmental Geology, Introduction to Environmental Geology and (with Nicholas Pinter) Active Tectonics
(Prentice–Hall). He holds bachelors degrees in both geology and mathematics from California  State university, Fresno; an M.S. in geology from the University of California; and a Ph.D. in geology from Purdue University.