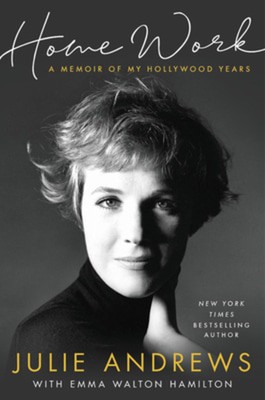 In this New York Times bestselling follow-up to her critically acclaimed memoir, Home, Julie Andrews reflects on her astonishing career, including such classics as Mary Poppins, The Sound of Music, and Victor/Victoria.
In Home, the number one New York Times international bestseller, Julie Andrews recounted her difficult childhood and her emergence as an acclaimed singer and performer on the stage.
With this second memoir, Home Work: A Memoir of My Hollywood Years, Andrews picks up the story with her arrival in Hollywood and her phenomenal rise to fame in her earliest films -- Mary Poppins and The Sound of Music. Andrews describes her years in the film industry -- from the incredible highs to the challenging lows. Not only does she discuss her work in now-classic films and her collaborations with giants of cinema and television, she also unveils her personal story of adjusting to a new and often daunting world, dealing with the demands of unimaginable success, being a new mother, the end of her first marriage, embracing two stepchildren, adopting two more children, and falling in love with the brilliant and mercurial Blake Edwards. The pair worked together in numerous films, including Victor/Victoria, the gender-bending comedy that garnered multiple Oscar nominations.

Cowritten with her daughter, Emma Walton Hamilton, and told with Andrews's trademark charm and candor, Home Work takes us on a rare and intimate journey into an extraordinary life that is funny, heartrending, and inspiring.

Here's what you say about
Home work - Julie Andrews.

Julie Andrews's legendary career encompasses the Broadway and London stages, as well as multiple films, television shows, album releases, concert tours, directing assignments, and the world of children's publishing. In 2000 the title of Dame Commander of the British Empire was bestowed upon her by Queen Elizabeth II for lifetime achievements in the arts and humanities. Her many other honors include a Kennedy Center honor in the fall of 2001. She was married to film director Blake Edwards for forty-one years, and the couple have five children, ten grandchildren, and three great-grandchildren.

Emma Walton Hamilton is an award-winning writer, producer and arts educator. Together with her mother, Julie Andrews, she has written over thirty books for children and young adults. Emma is on the faculty of Stony Brook University's MFA in Creative Writing, where she serves as director of the Children's Lit Fellows and the Young Artists and Writers Project.

"Home Work is a quiet revelation. And by quiet I don't mean dull. The book is packed with emotion, action, gossip, and fascinating tidbits about craft. The Julie Andrews we get to know is salty, funny, passionate, hard-working, gracious, and above all, a brilliant vocalist and actress who has braved many disappointments."-O Magazine

"A frank and intimate storyteller whose radiant spirit fills these pages, Andrews chronicles the peaks and valleys of her life and career. This event-packed memoir is a must for fans of Andrews's life and work, students of cinema history, and anyone who is curious about musical film production."
-Library Journal (starred review)

"Shares reflections on Andrews's astonishing career, and discusses her famous roles in Mary Poppins, The Sound of Music, Victor/Victoria, and more."-Bustle, New Celebrity Memoirs that Will Leave You Starstruck This Fall

"[Home Work gives] readers long-awaited details about [Julie Andrew's] earliest films like Mary Poppins and The Sound of Music.... Andrews continues to approach life -- and writing -- with strength and grace."-People

"Sincere and inspiring...This charming account of Andrews's professional and personal life will no doubt serve to make the venerated performer all the more beloved."
-Publishers Weekly

"Home Work is an admirable book in many ways: Andrews' frankness about how therapy has helped her, her clear-eyed assessment of her beloved but troubled husband, 'Blackie,' and the graceful kindness that's evident on every page."-The Seattle Times

"[W]arm, graceful, and candid... This deeply pleasurable and forthright chronicle illuminates the myriad reasons 'home work' has such profound meaning for artist and humanitarian Andrews... [a] treasury of delectable Hollywood revelations."
-Booklist

A delightful remembrance of her own childhood, and an engrossing prelude to her cinematic career . . . Andrews is an accomplished writer who holds back nothing while adding a patina of poetry to the antics and anecdotes throughout this memoir of bittersweet backstage encounters and theatrical triumphs.
-Publishers Weekly, -

"The inside-look into the perils and stress of movie making, and the honest portrayal of Andrews' struggles to blend her career, home life, and complicated personal matters offers a rich glimpse into a resilient star. Edward's mercurial but brilliant and generous nature is vividly recounted...her memoir makes it vividly clear that her stardom was not an easy path to achieve."
-The Missourian
Type
BOOK
Edition
First edition
Keyword Index
Motion picture actors and actresses - Great Britain - Biography.|Singers - Great Britain - Biography.
Country of Publication
New York (State)
Number of Pages
340 , 32 unnumbered of plates