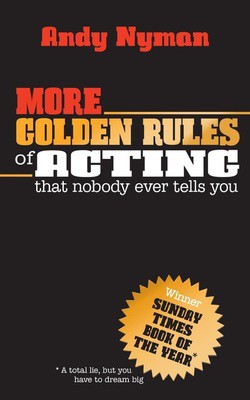 Andy Nyman's first book, The Golden Rules of Acting, has become a bestseller in the acting world. Now he returns to bring you more priceless nuggets gleaned from more than thirty years in the acting business.

This book will help you to...

Written with the same candid wit as his first book, this is every actor's new best friend - in handy paperback form.

'With great humour, wisdom and panache, Andy Nyman presents tasty advice for any actor. He knows that the more rules and craft under your belt, the more daring and original you will be as an artist' Glenn Close

'As with the first volume, this book gets to the heart of what being a working actor is about. No faff, no mystery, just practicalities that are always worth being reminded of' Martin Freeman

'One man shouldn't be so wise and entertaining, but Andy Nyman somehow is. His latest Golden Rules are exactly that - and wild fun, to boot. I recommend this book not just to actors, but to anyone who has ever seen an actor act. Nyman's insights apply to us all' J.J. Abrams

Here's what you say about
More golden rules of acting - Andy Nyman.

Andy Nyman is an actor, writer and magician.

He has appeared in many films, including Severance, Death at a Funeral, The Commuter, Judy and Jungle Cruise. He won the coveted Best Actor Award at the 2006 Cherbourg Film Festival for his performance in indie movie favourite Shut Up and Shoot Me.

On television he has played an incredibly diverse range of roles, including Winston Churchill inPeaky Blinders,Jonty de Wolfe in Channel 4's cult comedyCampus, and Patrick in Charlie Brooker's BAFTA-nominated series Dead Set. Andy has also appeared in many plays, including Martin McDonagh's Hangmen and Mike Leigh's Abigail's Party in London's West End,and Stephen Sondheim's Assassinsand the lead role of Tevye inFiddler on the Roof, both at the Menier Chocolate Factory.

Andy has co-created and co-written many of Derren Brown's television and stage shows alongside Derren. Together they created some of the most notorious and popular TV of the past years, including Russian Roulette, The System, The Heist and The Events, including predicting the National Lottery result. Andy has also co-written and directed most of Derren's stage shows, including Something Wicked This Way Comes, which won them the 2006 Olivier Award for Best Entertainment, and Secret, which won them a 2017 New York Drama Desk Award. Andy has also invented many very popular magic tricks which are performed by magicians the world over. His book of collected magic effects, Bulletproof, was published in 2010.

In 2010, along with Jeremy Dyson, Andy wrote and directed the stage play Ghost Stories. It broke box-office records at theatres and led to two West End runs of thirteen months each, and productions all over the world. In 2018 Andy and Jeremy wrote and directed the feature film version of Ghost Stories, which starred Andy, Martin Freeman, Alex Lawther and Paul Whitehouse. It received incredible reviews worldwide and was 'Certified Fresh' on Rotten Tomatoes.

'Morsels of indisputable wisdom, which should provide much solace for any aspiring actor... practical and sensible suggestions, almost certain to bolster the confidence of anyone seeking to make their way in the business'

'A fantastic tool… an extremely humorous read [which] imparts pearls of wisdom... Nyman's personality lifts off the page, which is a phenomenal attribute to have instilled in his book'