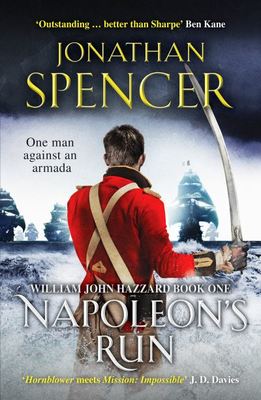 'Better than Sharpe... Napoleon's Run deserves to be a runaway success'
Ben Kane, Sunday Times bestselling author of Lionheart One man against an armada

London, 1798. Late one night, a junior naval officer at the Admiralty intercepts a coded despatch, marked with blood: Napoleon Bonaparte is about to launch the largest invasion fleet in history. Target: unknown.

England is vulnerable, bereft of allies, and the Sea Lords fear a direct assault on Britain. Admiralty Intelligence sounds the alarm and prepares to unleash Nelson and the Mediterranean squadron.

But before they can, they need vital information. They need a special officer to infiltrate by land or by sea to uncover the destination of Napoleon's armada - a man who never stops.

But will he agree to help them?

Betrayed by the Admiralty at the African Cape three years earlier, Hazzard has vowed never to trust them again. Bitter memories poisoned his return home, and his devoted fiance Sarah, unable to bear his pain any longer, disappears in Naples - never to be seen again.

But the Admiralty knows just how to get him back.

They know where Sarah is, and her life is in danger

From pitched sea-battles to back-street duels in a covert war, this is the epic adventure of the new hero of Napoleonic fiction: Hazzard. Perfect for fans of Seth Hunter, Bernard Cornwell and C. S. Forester.

Never give up the boat.

'This is an outstanding novel, made even more remarkable by its dbut status. I loved it, from the first page to the end. Better than Sharpe, gripping and intense, Napoleon's Run deserves to be a runaway success' Ben Kane, Sunday Times bestselling author of Lionheart

'This book has it all. Combines great action with really good history, and an engaging and original character in Marine officer William Hazzard, who adds a satisfying dash of the swashbuckling Bombay Buccaneers to some solid scholarship. In many ways this captures the true - and surprisingly subversive nature - of early British imperialism' Seth Hunter, author of the Nathan Peake novels

'Outstanding... Packed to the gunwales with action, this fast-paced story introduces us to William Hazzard, a Marine Lieutenant who takes on not just Napoleon, but also the espionage and machinations of the new French Republic during the reign of terror, Neapolitan high society, and even the British Admiralty itself. Leading a crew of wonderfully-drawn characters, Hazzard is not only a convincing action hero, but also one who offers a timeless insight into loyalty, trust and honesty. A thumping read' Chris Lloyd, author of The Unwanted Dead

'This book has a rich cast of characters who will delight, enthral and keep you turning the pages to the very end. A brilliant, thrilling read, with a new - and very believable - hero. This is my favourite historical novel of the year so far' Michael Jecks, author of the Last Templar Mysteries

'A strong, fast-moving story by an author with a deep knowledge of the period and the narrative skill of a fine story-teller' Andrew Swanston, author of Waterloo

'A great read! Well-tempered and well-researched, with well-drawn characters who will, I am sure, be with us for a while' Rob Low, author of The Lion Wakes

'Loads of action and plenty of plot twists, meticulously researched with a fine period feel' A.J. MacKenzie, author of The Ballad of John MacLea

Jonathan Spencer is from south-east London, the great-grandson of a clipper-ship captain who brought tea from China. He served in the Canadian army, studied ancient and modern history, and has lectured at universities and private associations on the subject of Napoleonic Egypt. He writes historical non-fiction under the name Jonathan Downs, his major work a revised account of the British acquisition of the Rosetta Stone, Discovery at Rosetta, (London 2008; Cairo 2020). He speaks several languages, has trained with the former Russian National fencing coach, and has lived and worked abroad all his life. He currently lives in the Western Cape in South Africa.