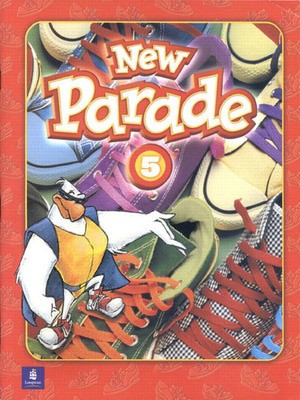 Here's what you say about
New Parade, Level 5 - Mario Herrera.

Mario Herrera holds a bachelor's degree in Education and a Master's degree in Teaching English as a Foreign Language (TEFL). He has taught English at all levels for 25 years, focusing his research and methodology development on young learners. In addition to this research and his student advising for postgraduate dissertations, he has been involved in teacher training for 13 years. As a speaker, he is high international demand and has given workshops throughout Latin America, Europe, The Middle East, Japan, Korea, as well as United States.

Theresa Zanatta is an author, teacher, teacher trainer and education consultant. She has been writing, teaching and training teachers and trainers for more than fifteen years. She is based in Barcelona but has worked in more than 20 countries around the world in Europe, the Middle East, Africa, Asia, Canada and the United States.

In addition to this, she regularly teaches at the University of Barcelona, in their post graduate program for elementary teachers as part of the national education Reforma and has given several courses, lectures and presentations on methodology for TESOL, IATEFL, the British Council, various Ministries of Education and several universities, including, the Ministries of Education, in Abu Dhabi, the United Arab Emirates, Qatar, the Sultanate of Oman, the Universitat Central de Barcelona (Masters Program in TEFL), the American University of Beirut, Lebanon and the Homs (Al-Bath) University in Syria.

Ms. Zanatta also publishes, directs and edits 10magazine, a free monthly, magazine distributed to over 10,000 families in Barcelona, Spain. The magazine serves as a resource guide linking the home, the school and the community for parents, teachers and all those involved in the care and education of young children and teenagers.

Ms. Zanatta has a B.Science from the University of Toronto, St. Michaels College, a teaching Certificate in TEFL from the Royal Society of Arts, London England and completed a Masters in TEEFL in curriculum design and development at the Universitat de Barcelona.