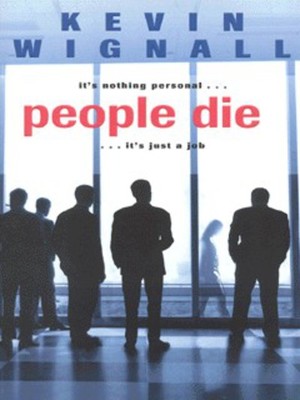 At 29, JJ has reached the peak of his career. He works out of a small consultancy in Zurich. He dates Aurianne - a beautiful air-hostess - but worries about whether he really loves her. But, thankfully, money is not a worry.

You see, JJ is a contract-killer.

Working freelance for a select organisation, he has built a reputation as a discreet, professional cleaner who doesn't cause trouble for employer or 'client' (beyond the obvious...). But when - after a disposing of a corpulent businessman - he becomes so fascinated with the man's beautiful companion that he lets her go, he starts a chain of events which will lead him to re-evaluate his whole life and beliefs.

Here's what you say about
People die - Kevin Wignall.

PEOPLE DIE is Kevin Wignalls first novel. He lives and works in a small west-country town.

JJ is a freelance hitman for a CIA-like organization. He is meticulously professional, except for one uncharacteristic slip. Hired to kill an art dealer named Bostridge, he unexpectedly finds the purported family man in bed with a girl, and, surprising himself, lets her go after she has
retrieved a small package from under the bed. Two years later, this assignment comes back to haunt him. JJ's contact with the company has been brutally murdered, and then they get JJ's girlfriend. It appears that a faction within the organization is trying to kill him. Key information about
his assassins leads him to a New England bed-and-breakfast run by Bostridge's widow and an agent who has a plan to put JJ in the clear--if he's willing to engage in a face-to-face meeting with a Russian mobster. Wignall's first novel boasts crisp writing, a tense atmosphere, and, most surprisingly, a likable if ruthless hitman. In fact, Wignall's only misstep comes in the final chapter, when he tries to reconcile JJ's professional and personal lives. An impressive debut.

Black and filmic
The Times

William Hoffman, who would prefer that you forget you ever heard his name and just call him JJ, attributes his success as a hit man to his stringent code of ethics. "I don't do politics, I don't deal information, I belong to no one," he says in Kevin Wignall's subversively appealing debut novel,
PEOPLE DIE (Simon & Schuster, $22). "I'm a freelance, a hired gun." But honor is no protection when JJ's contacts in Paris, Geneva and London are eliminated in "some sort of purge or turf war" and he finds himself on the target list. After hopscotching across Europe, executing his own bold
series of peremptory assassinations, JJ takes the advice of the last man on earth he trusts, and makes his way to a bed-and-breakfast in Vermont to seek refuge with the family of one of his victims.
Imagine that! (If you can't, this is not the coolly ironic, mordantly funny postmodern mystery story for you.) Wignall writes in a guarded style, saving his breath to savor JJ's growing discomfort as he struggles to figure out how many of these openhearted Americans know his dark secrets and what
they intend to do about him. Even more delicacy goes into the author's task of winning us over to JJ's quest for redemption, which he does by finding both the brutal language for JJ's killing arts and the soulful music of his wish for just one night of untrouble sleep.

Terse and spooky, PEOPLE DIE is that most remarkable of things: a killer-thriller with humour and heart
The Face

Members - keep an eye out for the NEW VOICES flyer coming in April. I'll be spotlighting PEOPLE DIE by Kevin Wignall as my pick as a New Voice in mystery. PEOPLE DIE is about a British hitman named JJ. As he "goes about his business," someone is trying to have him killed. He starts off in Paris, then makes his way toward the US trying to find out who wants him out of the picture. As the bullets fly and more people wind up dead, JJ must find the man behind it all before it's too late. An exciting read, holding you until the very end!
Mystery Guild Website

With short, vibrant chapters, plenty of action, expert plotting, and quality writing, People Die is well worth your time. British writer Kevin Wignall creates a beautiful mood and atmosphere, along with a complex character who will not be forgotten. I loved this book, with its strange mix of sentimentality and callous violence, beauty and death. Something has gone wrong in the world of spies, gangsters, and hit men. William Hoffman, a contract killer who moves in a secret world of international intrigue, finds his primary contact beheaded, his girlfriend stuffed dead in a freezer, and his former lover feeling a little traitorous. Refusing to be a victim in this mad underworld, he sets out to find who is trying to kill him. As Hoffman struggles with his identity, trying to balance who he is with who he
once was, circumstances conspire to place him in the company of a family whose father/husband he killed. Ironically, he finds solace and acceptance with this family, though ultimately he must embrace his talent as a logical and ruthless killer.'
squarebooks.com
Type
BOOK
Keyword Index
Murder for hire - Fiction.
Country of Publication
England
Number of Pages
256