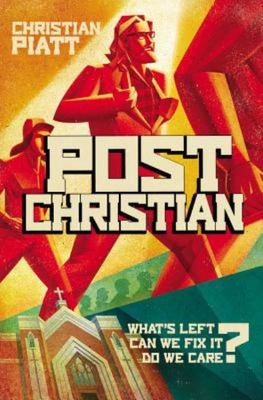 It's the end of Christianity as we know it. But it's not a catastrophe-it's an opportunity.

Thousands are walking away from the church. Christians are grappling with their faith. And both believers and nonbelievers wondering-what's coming next?

Fearless and provocative, spiritual trailblazer Christian Piatt offers a roadmap to the future of faith with an unflinching examination of the church today.

Can we fix it? Guided by the biggest historical, religious, and pop-cultural pioneers of the post Christian era, he demonstrates how to save the best of what Christianity has to offer-and how to rediscover and reinvent the rest.

Do we care? There's plenty of good left in Christianity-if we dare to be as scandalously graceful and loving as Jesus Himself.

Bold and insightful, Postchristian dares Christians to break out of the box and invites outsiders into the fold as we revolutionize faith for a postmodern world.

Here's what you say about
Post Christian - Christian Piatt.

Christian Piatt is an author, editor, speaker, musician and spoken word artist. He co-founded Milagro Christian Church in Pueblo, Colorado with his wife, Rev. Amy Piatt, in 2004. Christian is the creator and editor of the Banned Questions book series, which include Banned Questions About the Bible and Banned Questions About Jesus. He co-created and co-edited the WTF: Where's the Faith? young adult series with Chalice Press, and he has a memoir on faith, family and parenting published in 2012 called PregMANcy: A Dad, a Little Dude and a Due Date.

"Christian Piatt is one of the smartest and most provocative young voices we have."
-Jim Wallis, President and Founder, Sojourners

"POSTCHRISTIAN is written directly for the spiritual needs of the 21st century."-Paul Brandeis Raushenbush, Executive Religion Editor, The Huffington Post

"I recommend this book to anyone of any religion who cares about a better, more compassionate world...important book full of righteous anger and profound mercy."
-A.J. Jacobs, New York Times bestselling author of The Year of Living Biblically

"For a profound book, it proved to be an easy read-but very disturbing."
-Tony Campolo, Professor of Sociology, Eastern University

"Piatt is no reactionary, wanting to save a dying institution, but neither does he take the popular route of simply walking away. Instead he believes that there is a subversive core in the tradition worth remembering and retaining."
-Pete Rollins

"Like the first rumble before a volcano explodes, POSTCHRISTIANprefigures the revolution that will remake Christianity in North America, and maybe the world."-Frank Schaeffer, author, And God Said, "Billy!"

"Christian Piatt is right: behind the statistics of decline and the stories of dropouts is a platinum opportunity-one we Christians might never have seen or begun to seize if not for the wake-up call we've received."
-Brian D. McLaren, author, We Make the Road by Walking (www.brianmclaren.net)

"Important, insightful, and timely...His words offer wisdom for a path forward and hope for the future of God."
-Matthew Paul Turner, author of Our Great Big American God and Churched

"A powerful, reasonable book that takes an honest look at the Church's vices as well as its virtues in the hope that both the Church and its detractors can move beyond the zero sum game of 'us vs. them' and explore more constructive ways of living together."
-Kevin Miller, director of Hellbound?

"In POSTCHRISTIAN, Piatt gives us an operating manual for the faith of tomorrow."
-Jason Boyett, author of O Me of Little Faith and Pocket Guide to the Afterlife

"Don't read this book because you want to. Read it because you have to."
-Chris Yaw, founder, ChurchNext TV

"Not only does he connect dots like a pro theology nerd, but you can actually read the book without Advil and a dictionary."
-Tripp Fuller, founder, HomebrewedChristianity.com

"If you stick with [this book], really stick with it, hope, love, and imagination will blossom into a love-filled reality of what Christendom can evolve into: the Kingdom of God in the here and now."
-Rev. Phil Shepherd, aka The Whiskey Preacher