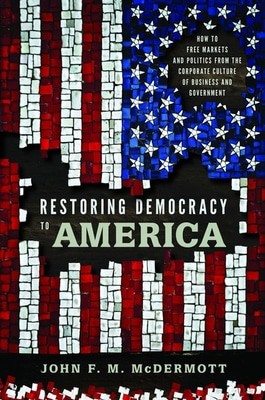 If the current economic malaise accomplishes nothing else, it should help awaken us all to the realization that our country has been on a path of self-destructive behavior for several decades-a reversal of the progressive path that had made major gains in economic and political equality for a large majority of the U.S. population starting in the 1870s. It is John McDermott's purpose in this ambitious book to explain why that reversal happened, how society has changed in dramatic ways since the 1960s, and what we can do to reverse this downward spiral.

In Part 1 he endeavors to lay out the overall narrative of change from the 1960s to the present, emphasizing how a novel social structure came to be developed around corporate America to form what he calls "corporate society." Part 2 analyzes what the nature of this corporate society is, how it is a special type of "fabricated" structure, and why it came to dominate society generally, eventually including the government and university systems, which themselves became increasingly corporatized. The aim of Part 3 is to outline a path of reform that can, if all its parts can be integrated sufficiently to be effective, put us on the path to restarting the progressive movement.

Here's what you say about
Restoring democracy to America - John F. M McDermott.

John F. M. McDermott is Professor Emeritus of Social Science at The College of Old Westbury, SUNY, where he chaired the Labor Studies Department from 1981 to his retirement in 1990.

"Restoring Democracy to America both diagnoses the current stalemate and analyzes the roots of dysfunctional democracy from the 1870s, and especially after the 1960s, to today. This is a pertinent topic given bailouts, lobbyist power, gridlock, global warming, growing income disparities, and the general public's discouragement with both parties. A great strength of McDermott's book is his concrete proposals, requiring deep but possible reform for restoring a non-elitist participatory democracy-a government in which the electorate is not isolated from the decisions being made by big institutions that negotiate change with the government as equals. The book is written in the vernacular, and the problems and the proposals for reforms are novel and provocative."

"John McDermott's Restoring Democracy to America is an intriguing social, political, and economic analysis of the United States from the late 1950s to the present, as well as a personal memoir, history, and prescription for change. Erudite, wide-ranging, and not falling into conventional ideological or political categories, this book is disconcerting in its recitation of false paths taken, but it lays out a framework for change without indulging in platitudes or rhetoric. It addresses the question, how can an autonomous working-class political culture be renewed in the absence of trade unionism? At the heart of the prescription is the notion of work as a 'natural right' (more timely than ever in an age of double-digit unemployment), linked to a series of radical political and constitutional reforms. This book deserves a wide audience."

"John F. M. McDermott's Restoring Democracy to America is a sweeping, powerful political sociology of the conservative reaction that dominated the politics and culture of advanced capitalist democracies after the post-World War II 'welfare state consensus' weakened in the 1970s. His book brings social theory to bear upon a nuanced historical analysis of the rise (and now crisis) of deregulated, finance-driven, postindustrial capitalism. He adeptly shows how the Right succeeded (with difficulty) in bringing together the managerial elite's turn against the welfare state and the 'antimodernist' cultural impulses of deindustrialized communities. But McDermott does not simply chart the rise and consolidation of conservative rule; his analysis also illuminates the social dynamics that may give rise to democratic forces that can revive progressive politics."