The future does not compute - Stephen L. Talbott 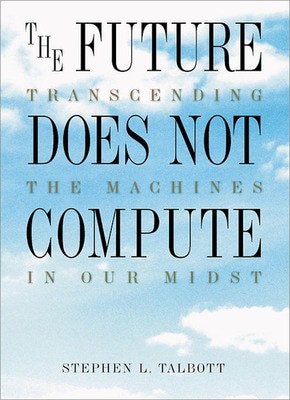 Many pundits tell you that the computer is ushering us toward a new Golden Age of Information.
A few tell you that the computer is destroying everything worthwhile in our culture.
But almost no one tells you what Stephen L. Talbott shows in this surprising book:
the intelligent machine gathers its menacing powers from hidden places within you and me.
It does so, that is, as long as we gaze into our screens and tap on our keyboards
while less than fully conscious of the subtle influences passing through
the interface.Talbott awakens us to these influences by conducting a wide-ranging tour:

After reading The Future Does Not Compute, you will never again be
able to sit in front of your computer with quite the same glazed stare.(BACKCOVER COPY) The technological Djinn, now loosened from all restraints, tempts us
with visions of a surreal future.
It is a future with robots who
surpass their masters in dexterity and wit; intelligent agents who
roam the Net on our behalf, seeking the informational elixir that
will make us whole; new communities inhabiting the clean, infinite
reaches of cyberspace, freed from war and conflict; and lending
libraries of "virtually real" experiences that seem more sensational
than the real thing.Not all of this is idle or fantastic speculation -- even if it is
the rather standard gush about our computerized future.
Few observers
can see any clear limits to what the networked computer might eventually
accomplish.
It is this stunning, wide-open potential that leads one
to wonder what the Djinn will ask of us in return for the gift.
After
all, any potential so dramatic, so diverse, so universal, can be
taken in many directions.
That is its very nature.
Who will choose the
direction -- we, or the Djinn?The intelligent machine receives a shadow of our own intelligence. This shadow consists of all the collective, automatic, sleepwalking, deterministic processes we have yielded to.
That is, it consists of our own willingness to become machines.
The crucial question today is whether we can wake up in time.
Only in wakefulness can we distinguish ourselves from the automatisms around us.
Where we remain asleep -- where we live in our own shadow -- we are the Djinn.The Net is the most powerful invitation to remain asleep we have ever faced.
Contrary to the usual view, it dwarfs television in its power to induce passivity, to scatter our minds, to destroy our imaginations, and to make us forget our humanity.And yet -- for these very reasons -- the Net may also be an opportunity to enter into our fullest humanity with a self-awareness never yet achieved.
But few even seem aware of the challenge, and without awareness we will certainly fail.

Here's what you say about
The future does not compute - Stephen L. Talbott.