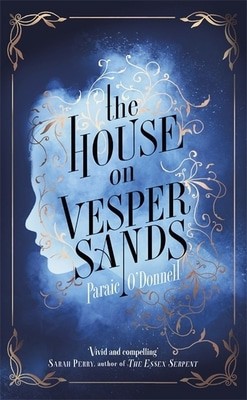 'Tremendously good' Observer
'The most vivid and compelling portrait of late Victorian London since The Crimson Petal and the White' Sarah Perry
'Part Wilkie Collins, part Conan Doyle' Guardian
'Huge fun' Daily Mail
'Has everything you could want in a novel' Stylist

'Dickens is whirling enviously in his grave ... Read by a fire on a cold winter evening' Irish Times

'Ladies and gentlemen, the darkness is complete.'

It is the winter of 1893, and in London the snow is falling.

It is falling as Gideon Bliss seeks shelter in a Soho church, where he finds Angie Tatton lying before the altar. His one-time love is at death's door, murmuring about brightness and black air, and about those she calls the Spiriters. In the morning she is gone.

The snow is falling as a seamstress climbs onto a ledge above Mayfair, a mysterious message stitched into her own skin. It is falling as she steadies herself and closes her eyes.

It is falling, too, as her employer, Lord Strythe, vanishes into the night, watched by Octavia Hillingdon, a restless society columnist who longs to uncover a story of real importance.

She and Gideon will soon be drawn into the same mystery, each desperate to save Angie and find out the truth about Lord Strythe. Their paths will cross as the darkness gathers, and will lead them at last to what lies hidden at the house on Vesper Sands.

Here's what you say about
The House on Vesper Sands - Paraic O'Donnell.

Paraic O'Donnell is a writer of fiction, poetry and criticism. His first novel, THE MAKER OF SWANS, was named the Amazon Rising Stars Debut of the Month for February 2016 and was shortlisted for the Bord Gis Energy Irish Book Awards in the Newcomer of the Year category. He lives in Wicklow, Ireland with his wife and two children.

A gloriously unorthodox confection, part Wilkie Collins, part Conan Doyle, with a generous handful of police procedural and a splash of Stella Gibbons's Cold Comfort Farm. Both disquietingly eerie and impossible to read without laughing out loud ... A cracking good read.
Guardian

The most vivid and compelling portrait of late Victorian London since The Crimson Petal and the White
Sarah Perry, author of THE ESSEX SERPENT

Charles Dickens is whirling enviously in his grave ... Brilliantly written, compelling and satisfying in so many ways. It demands to be read by a fire on a cold winter evening (but make sure the doors are locked before you begin). I only wish it had been twice as long.
Irish Times

Witty, immersive, chock full of atmosphere and setting (hello Victorian London), three-dimensional characters, an addictive plot and snappy dialogue, The House On Vesper Sands has everything you want it in a novel. If you're stuck for a book to buy this Christmas, then this could well be it.
Stylist

Like the love child of Dickens and Conan Doyle, but funnier than both
Liz Nugent, author of LYING IN WAIT

I'm not completely sure what the word 'rollicking' means, but I can personally guarantee that The House on Vesper Sands is a rollicking good read. For a novel about grief, estrangement, and the literal stealing of vulnerable young women's souls, this book is a lot more fun than it has any right to be. Paraic O'Donnell's sheer love of his characters is exuberant and infectious; the dialogue crackles with verve and wit, and the plotting is as intricately satisfying as a heavy pocket watch. The setting may be Victorian , but in modern parlance this novel is an absolute banger
Jon McGregor, author of RESERVOIR 13

A compelling, darkly funny portrait of late Victorian London, and focuses on crimes with a supernatural flavour
Observer, '50 Biggest Books of Autumn 2018'

An immersive and darkly entertaining story of love, loss and lies set in a vividly realised Victorian London
iNews, 'Best 19 Books for Autumn 2018'

A mash-up of Victoria Gothic and fantasy, this is huge fun
Daily Mail

Not since Sarah Waters has a modern novelist played with Victorian language and mores with such wit and skill ... This mastery of voice wouldn't be half as satisfying, of course, if the story were not a properly ripping yarn ... Liz Nugent compares The House on Vesper Sands to Dickens and Conan Doyle, but the novel's depiction of young women who are both physically and psychologically tormented by shadowy male forces in the 1890s suggests one of the most iconic books of that decade, Bram Stoker's Dracula. The appealing characters, however, are more complex than Stoker's, and there's a real humanity to the novel that will leave the reader hoping that O'Donnell returns to the gaslit streets of fin de sicle London for more sinister, beautifully told stories.
Sunday Business Post

O'Donnell's talent truly shines ... O'Donnell's style can be likened to Charles Dickens on steroids and The House on Vesper Sands sits comfortably with the likes of Sarah Perry's The Essex Serpent or Francis Spufford's Golden Hill as recent period-set page turners. Like those two, a gorgeous prose elevates this ... An expertly crafted and uproariously entertaining novel, spun by a writer approaching his peak
Irish Examiner

Engrossing ... The narrative canters from high-society soirees to East End tenements, infused with menace both earthly and supernatural
Irish Mail on Sunday

A rollocking romp through the dark alleys and gaslit streets of Victorian London ... Spine-tinglingly spooky with a touch of
Dickens and also properly funny, this is the perfect Halloween read
Red magazine