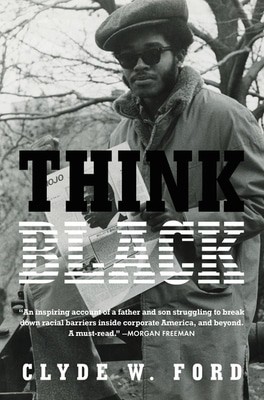 "A masterful storyteller, Ford interweaves his personal story with the backdrop of the social movements unfolding at that time, providing a revealing insider's view of the tech industry. . . simultaneously informative and entertaining. . . A powerful, engrossing look at race and technology."

In this thought-provoking and heartbreaking memoir, an award-winning writer tells the story of his father, John Stanley Ford, the first black software engineer at IBM, revealing how racism insidiously affected his father's view of himself and their relationship.

In 1947, Thomas J. Watson set out to find the best and brightest minds for IBM. At City College he met young accounting student John Stanley Ford and hired him to become IBM's first black software engineer. But not all of the company's white employees refused to accept a black colleague and did everything in their power to humiliate, subvert, and undermine Ford.

Yet Ford would not quit. Viewing the job as the opportunity of a lifetime, he comported himself with dignity and professionalism, and relied on his community and his "street smarts" to succeed. He did not know that his hiring was meant to distract from IBM's dubious business practices, including its involvement in the Holocaust, eugenics, and apartheid.

While Ford remained at IBM, it came at great emotional cost to himself and his family, especially his son Clyde. Overlooked for promotions he deserved, the embittered Ford began blaming his fate on his skin color and the notion that darker-skinned people like him were less intelligent and less capable-beliefs that painfully divided him and Clyde, who followed him to IBM two decades later.

From his first day of work-with his wide-lapelled suit, bright red turtleneck, and huge afro-Clyde made clear he was different. Only IBM hadn't changed. As he, too, experienced the same institutional racism, Clyde began to better understand the subtle yet daring ways his father had fought back.

Here's what you say about
Think Black - Clyde W. Ford.

Clyde W. Ford was born in NYC. He's the author of thirteen works of fiction and non-fiction. He's also a psychotherapist, an accomplished mythologist, and a sought-after public speaker. In 2006, Ford received the Zora Neale Hurston/Richard Wright Award in African American fiction. He was named a “Literary Lion” by the King County Library System in 2006, 2007, and 2008. Clyde was voted “Best Writer of Bellingham, Washington” in 2006 and 2007 by readers of the Cascadia Weekly and he received the 2007 Bellingham, Washington Mayor's Arts Award in Literature. Ford is currently a speaker for Humanities Washington, an affiliate of the NEA, where he presents a program entitled, "Let's Talk About Race," around the state. Clyde has participated in hundreds of media interviews and has appeared on the Oprah Winfrey Show, New Dimensions Radio, and National Public Radio. He lives in Bellingham, Washington where he writes aboard his 30-foot trawler, and cruises the waters of the Inside Passage.

"A masterful storyteller, Ford interweaves his personal story with the backdrop of the social movements unfolding at that time, providing a revealing insider's view of the tech industry. . . simultaneously informative and entertaining. . . A powerful, engrossing look at race and technology."
Kirkus Reviews(starred review)

"An engrossing story of how racist experiences of a Black father and son working at IBM had roots in a corporate mentality that lent support to the Nazism, Eugenics, and Apartheid."
Jeffrey Stewart, Pulitzer Prize winning Author of The New Negro: The Life of Alain Locke

"This compelling memoir of a son and his father-two polymaths determined to break corporate barriers without being broken in return-takes us on an unusual journey
where the paths of race, relationships, and the social consequences of technology converge."
Paula J. Giddings, author of IDA, A Sword Among Lions: Ida B. Wells and the Campaign Against Lynching.

"Ford's searching reconsideration of his father sparkles with compassion and hard-earned wisdom. As he recounts the indignities his father endured as IBM's first African-American systems engineer, we're reminded of the sacrifices legions of unsung 'firsts' made to integrate corporate America, and of the lonely battles ahead."
Pamela Newkirk, award-winning author of Diversity, Inc: Why a Billion-Dollar Business Failed to Achieve Equality and of Spectacle: The Astonishing Life of Ota Benga

"I was fascinated by this moving biography/memoir in which Ford, using the experiences of both his father, the first Black software engineer at IBM and himself frames the story of race in America over the last 70 years."
Nancy Pearl, author of the Book Lust series

"Long before there was Google, there was IBM. Think Black delivers an engaging look at our human and technological condition-and a company that sought to rule the world by making every distinction as black and white as the difference between one bit and the next."
George Dyson, author of Turing's Cathedral and Darwin Among the Machines

"Clyde W. Ford has woven a rich tapestry, combining family memoir with the history of a corporation. This mesmerizing story is achingly reflective, as Ford discernably captures his dad's challenges with his own. Think Black is enlightening, insightful, and essential to understanding the impact of corporate racism on individuals."
Dr. Julianne Malveaux, author of Surviving and Thriving

"In this engaging book-part autobiography, part biography, and part information technology primer-Clyde Ford trains an agile mind and keen powers of observation on both his father's historic role in the early days of computers, and on America's cardinal sin, racism. Think Black will make you think. . .It will also make you wince."
William Neukom, founder of the World Justice Project

"An inspiring account of a father and son struggling to break down racial barriers inside corporate America , and beyond. A must read."
Morgan Freeman