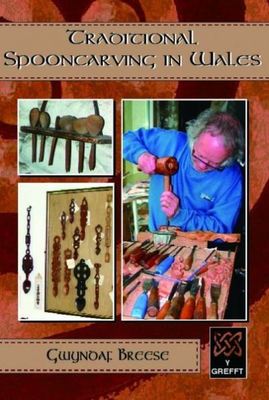 A book describing the craft of carving spoons, by a specialist who worked and displayed his work in the Museum of Welsh Life at St Fagan's for much of his life. Illustrated with black-and-white photographs, and 32 pages of colour photographs.

By now, the lovespoon has become one of the representative images of Wales, a unique emblem of the culture. There's nothing like it anywhere else in the world. Every year, thousands of visitors take home with them examples of the lovespoon, and every year the lovespoon enjoys a prominent position in Welsh weddings.
To tell the story of the lovespoon, this book starts with its humble older sister, the domestic spoon. Long before knives and forks were used for eating, and long before the availability of metal spoons, carved wooden spoons were in wide use, and their manufacture was a major occupation in the Welsh countryside. The craft of domestic spoonmaking developed into that of the lovespoon, and the author details the different styles that emerged, explains some of the symbolism of the designs, describes the woodworking craft from start to finish, and traces the growth, decline and rebirth of this uniquely Welsh craft tradition.
Publisher: Llygad Gwalch Cyf

This compact and detailed book on the history of spooncarving in Wales forms one of the Welsh craft series, exploring Wales's unique traditions. With over forty years experience of spoon carvers, and now working as a specialist in the practices of wood carvers and turners at the Welsh Folk Museum in St Fagan's, the author manages to condense a huge breadth of knowledge and research into a concise volume suitable for novice and expert alike.

With a great deal of misleading information being given to both tourists and local people, this book aims to set the record straight about the history of lovespoons. Breese sets the tradition of lovespoons firmly within the context of domestic spoon carving from which it came. From the carving of domestic spoons, the carving of lovespoons, to give as love tokens, developed into a unique Welsh tradition, using more techniques and designs than anywhere else in the world.

To help us appreciate the amount of effort and affection that must go into the making of a lovespoon to give to your beloved, we learn first about the making of domestic spoons without any mechanical equipment. Whilst the use of spoons in food preparation has existed since prehistoric times, it was only during the seventeenth century that spoons were carved to eat semi-liquid food from a bowl. Sycamore, as a stainless, odourless and taste-free timber, was favoured for carving eating spoons, and basic hand tools such as a small axe, a wooden spokeshave, straight knives for smoothing and the 'twca cam', a bent tool for hollowing out, were used to craft a log into a spoon.

Although there still seems to be a great detail of speculation about the exact origin of the lovespoon tradition and how widespread it was, there is ample evidence to show that lovespoons were made and given as love tokens from the middle of the seventeenth century until the end of the nineteenth century, when the tradition declined. What makes the early lovespoons so romantic in our imagination is that they were all the handiwork of the donor ? they were not bought or commissioned. The carver would carve the lover's initials and other simple symbols as a token of his love in the wood. This simplicity changed over the years, developing into some wonderfully ornate and complex designs.

Sadly, as with many rural crafts and traditions, the making and giving of lovespoons declined for many reasons, with the young men moving away from the countryside to the industrial towns, the anglicizing of Wales, and the austere attitudes of the Nonconformist movement, all offered as playing their part.

In spite of that, there has been a recent upsurge in the interest of purchasing lovespoons from all over the world. Although the authentic tradition has declined, more lovespoons have been made during the last 25 years than the previous two to three hundred years. The author includes some beautiful photographs of the work of contemporary lovespoon makers and there are some stunning designs included in the book ? both those which use more traditional designs as well as more elaborate and unusual patterns.