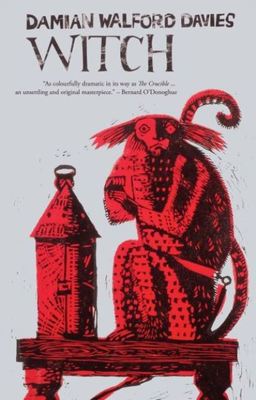 With the narrative pull of a novel and the vibrancy of a play for voices, Damian Walford Davies's Witch offers a thrilling portrait of a Suffolk village in the throes of the witchcraft hunts of the mid-seventeenth century. The poems in this collection are dark, compact and moving: seven sections, each of seven poems, each of seven couplets.

Here's what you say about
Witch - Damian Walford Davies.

The speakers - from Thomas Love the priest, the villagers who slowly succumb to suspicion and counter-accusation, the 'discoverer of witches' Francis Hurst, and the 'witch' herself - authentically conjure a war-torn society in which religious paranoia amplifies local grievances to fever pitch. Witch is a damning parable that chimes with the terror and anxieties of our own haunted age.

'crackle[s] with intelligence and inventiveness . . . [a] performer with great panache and stylistic verve' (Nicholas Murray, Planet)

"The attention to structure, the sparing use of words - Davies' poems are carefully constructed, clever edifices - and well worth a perusal." - Ambit

A remarkable work, at once poetic sequence, play and novel; Witch gives us an insight into an English village in the 1640s where, during a lull in the Civil War, the mania of witch-hunting takes hold.

Drawing on pamphlets and accounts of the time of the Suffolk trials as well as later analysis, Damian Walford Davies creates his own village where a mother and daughter (Clemence and Alyce) become the focus of the fears, guilt and confused desires of both squire Strelley and their peasant neighbours. Thomas Love, the naive, over-scholarly vicar (whose church is vandalised by puritan troops) attempts to warn and protect the women but Strelley calls in Hurst, the witch-finder. For Lind, the Judge, the Assize is a progress both triumphant and painful. He is perfectly aware of the flawed evidence, despises the accusers, but countenances the inevitable verdict as a sort of joke. Thomas Love, with his pet marmoset, watching the victims, will probably be next.

The story is told through seven groups of fourteen-line poems, seven couplets each - a magical formula - which explore the spoken and unspoken thoughts of the characters. Densely packed with sub-text, with diction perfectly tailored to their speakers but rich with poetic resonance, the poems crackle with emotion and brilliantly evoke the time and place. Walford Davies makes us pick up the clues and work for the full story. It is a sequence to read at least twice at a sitting. It has humour and compassion but clearly shows how small grudges, jealousies and fears can turn into murderous paranoia when abetted by corrupt authority.