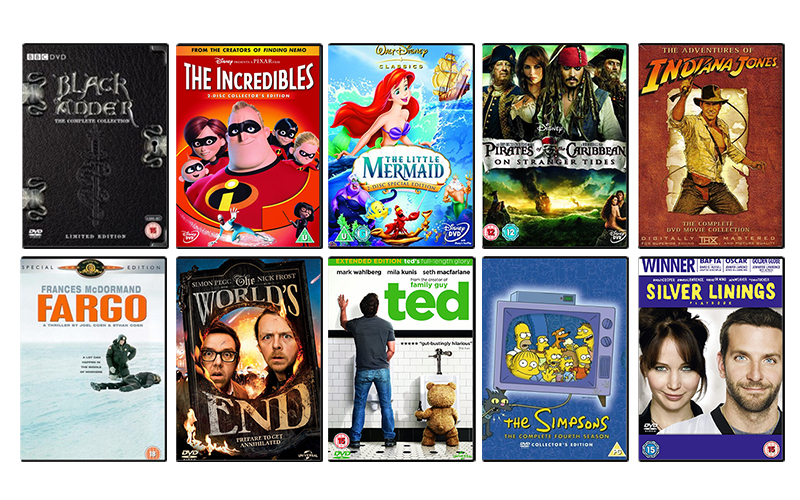 The Top 10 Most Traded DVDs

One of the most common questions we get here at musicMagpie is ‘what DVDs do people sell to you most?’

Well, ask and you shall receive. Here are the DVDs our customers have sold the most of recently:

7) Pirates of the Caribbean: On Stranger Tides

Quite a few surprises, isn’t there? Read on for our theories on why people are selling these particular titles…

Although some would say this is Pixar’s best movie, it’s clear that the British public disagree. That, or they’ve realised that it’s on every Christmas and you can watch it on Sky on Demand or Now TV. We’re going for the latter.

As one of the only major Oscar winners in our chart, we can only imagine that people are selling this to make space for the latest batch of movies bestowed with the legendary little-gold-man trophy.

What happens to Disney DVDs once the kids grow up and leave home? They come to us, of course! Just don’t tell the nippers.

At first, we thought people might be selling the trilogy boxset to upgrade to the quadrilogy boxset. And then we remembered how bad Kingdom of the Crystal Skull was and realised that it probably ruined the other Indy movies for people forever.

Season 4 is arguably the best of all The Simpsons seasons, with classics like Lisa’s First Word and Marge and the Monorail. But let’s face it, the best way to watch The Simpsons is at teatime on Channel 4 or on Sky 1.

Another stone cold classic that finds itself on our chart, we’re guessing that the sheer physical size of the Blackadder Collection makes it a prime choice when decluttering.

Pirates of the Caribbean: On Stranger Tides

On Stranger Tides is generally considered to be the worst of the Pirates series (although it’s still pretty good), which might explain why it’s in our chart. Or, people just want to buy the shiny 4-movie collection!

We were a bit puzzled by this one, until we saw a Shaun of the Dead cricket bat signed by Simon Pegg on eBay and realised Peggsters (as his fans are called) are probably selling everything they can to buy it.

The DVD of the excellent TV series is coming out soon, which is a decent enough reason to cash in on the DVD of the equally excellent film that inspired it. You’ll probably be able to get them in a joint boxset soon anyway.

Seth Macfarlane’s 2nd feature film, A Million Ways to Die in the West, was a bit rubbish, which could explain the British public’s sudden urge to sell their copies of the actually-good Ted. A shame, but that’s the way it goes!

If any of the DVDs in our chart are lying around gathering dust on your shelves, why not get an instant price and sell them with musicMagpie? Click here to start selling!

View all post by Chris Smith.
← The Top 5 Most Traded Games This Week
The Top 10 Most Traded CDs →