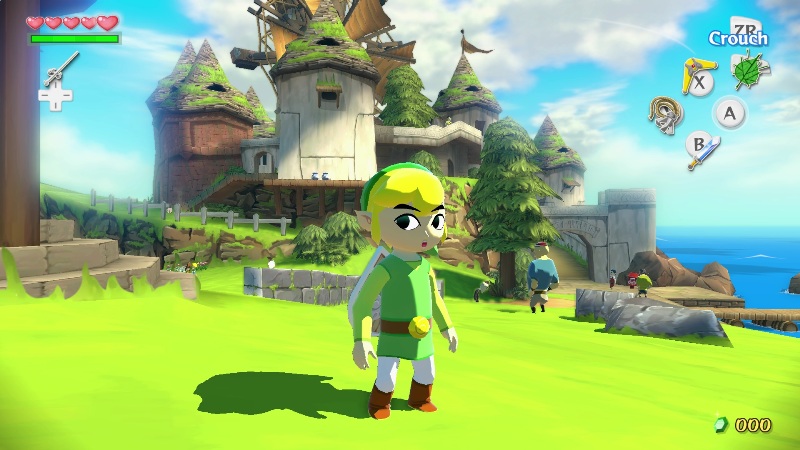 The Last of Us Remastered, a PS4 remake of the PS3 classic that came out just over a year ago, is released this week. Surely this is just a cynical cash-grab by Sony and Naughty Dog?

Probably not, actually. Videogames, which are constantly being improved by bigger and better technology, often benefit from the odd graphical facelift or gameplay improvement. Yes, the studio makes more cash, but remakes allow more gamers to play classic games without their eyeballs melting from the horribly outdated graphics.

Plus, most game remakes are actually pretty good. Here are a couple of our favourites.

The Legend of Zelda: The Wind Waker HD

The Wind Waker is the black sheep of the Zelda family: it has distinctive cel-shaded graphics, you sail a small ship instead of riding a horse and, most importantly, almost nobody played it because it was released on the Gamecube.

It’s a shame, really, because The Wind Waker is possibly the best game in the Zelda series. It’s a truly unique experience and, like Majora’s Mask before it, allowed Nintendo to fully flex their creative muscles.

Fortunately, Nintendo saw fit to re-release the game last year on the Wii U – which, erm, not many people own either. Ah well, at least it looks pretty.

Resident Evil is undoubtedly one of the best games ever, with more scares per minute than a sleepover at Freddy Krueger’s house. It’s so good, in fact, that it’s spawned countless sequels, a massively successful film franchise and quite a few questionable fan fiction pieces.

Yet, the mother of all zombie games is a looking a bit shabby in her old age, which is actually quite fitting for a game about shambling corpses. Still, creators Capcom, with more than a faint whiff of money in their nostrils, decided to give the game a visual makeover in 2003 and re-released it…

…on the Gamecube. When will they learn, eh?!

Ironically, it’s actually easier to get your hands on a copy of the original game than it is the remake.

If I say the word ‘remake’, the first word that probably comes into your head is ‘lazy’. If it doesn’t, you need to watch more Hollywood remakes.

‘Lazy’ isn’t a word that could be used to describe the remake of The Secret of Monkey Island, however. Creators LucasArts took every single scene from the 1990 original and re-drew them by hand, re-recorded every single bit of audio and even overhauled the game’s interface to provide a better experience for modern gamers.

The result? One of the most downloaded games on Xbox Live and a whole new generation of Monkey Island fans. That’s how you do a remake, Hollywood.

We can’t imagine anyone who plays Goldeneye 64 in 2014 would be particularly offended by Pierce Brosnan appearing in the game instead of current Bond Daniel Craig. After all, Brosnan played Bond in the movie of the same name. It makes perfect sense.

Yet it was clearly something that troubled Activision, who decided to ‘reimagine’ the game in 2010. Brosnan was replaced by Craig, and the plot was even changed to reflect Craig’s moodier version of everyone’s favourite international man of mystery.

There were a few other changes too, with some of the gameplay updated to appease the Call of Duty and Battlefield crowd. It’s not as good as the original, but it’s a nice nostalgia trip that doesn’t require you to dig your N64 out of the attic.

Most 13 year olds are fresh-faced and sprightly, if a little bit on the moody side. Halo: Combat Evolved, however, looks more haggard than a long-lost member of the Rolling Stones.

Of course, that’s nothing a bit of graphical wizardry can’t fix. The Anniversary edition of Combat Evolved is the same in everything but looks, but is well worth shelling out on just to experience the glory of Master Chief’s inaugural adventure on the Xbox 360.

Combat Evolved: Anniversary is also going to be included in The Master Chief Collection, an upcoming Xbox One title which combines the 4 main Halo games into one lovely HD package.

We featured Another World in our top retro games for mobile a couple of weeks ago, but it also deserves credit as a genuinely brilliant new version of a game that first came out over 20 years ago.

Everything about the game is improved, from the graphics to the actual gameplay itself (it’s also a bit less difficult than the original, which is nice). Crucially, the team have re-designed the control interface especially for touchscreens too, which is always a bit of sensitive subject when it comes to converting a console game to smartphones and tablets.

The Legend of Zelda: Ocarina of Time 3D

The best game of all time, now available to play wherever you go (and in slightly headache-inducing 3D). Need we say more?

Share your favourite remakes with us in the comments, and remember that you can sell games with us if you need a bit of cash for the latest releases.

View all post by Chris Smith.
← 5 underrated games consoles (you can buy right now)
9 video games that need to be remade immediately →