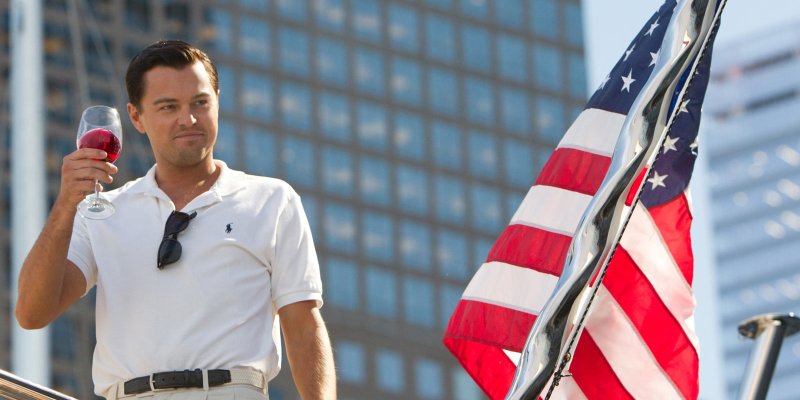 Considering it’s about a man most people wouldn’t pour water on if he was on fire, The Wolf of Wall Street is a surprisingly funny and enjoyable film.

Telling the tale of Jordan Belfort (Leonardo DiCaprio), the film charts Belfort’s rise to the top of the stock-trading food chain in hilarious and sometimes tragic (but mainly hilarious) fashion.

The main source of comedy is the sheer ridiculousness of Belfort’s lifestyle, which includes taking an unbelievable level of drugs, flying helicopters while drunk and having candles stuck where they really shouldn’t be. That’s just a small selection of the antics featured in Wolf…, which, it’s worth bearing in mind, is based on a true story.

At the centre of all this is DiCaprio, who gives the performance of his career as Belfort. DiCaprio swaggers around the screen like a man constantly on the verge of a mental breakdown, a force of nature dedicated only to money and partying. It’s a performance that deserved an Oscar, if only for the ‘Lemon’ scene (which we won’t spoil here).

Along with DiCaprio is Jonah Hill as best mate and business partner Donnie, who’s basically a less-cool but much crazier version of Belfort. It’s another great performance from Hill, who seems to have developed from a mini-Seth Rogen to a serious actor almost overnight.

Equally impressive is relative newcomer Margot Robbie who plays Naomi Lapaglia AKA Mrs. Jordan Belfort. Even though most of her screen time is spent with DiCaprio, her feistiness more than manages to match his outlandish performance.

Special mention also has to go to Matthew McConoughey, who appears for about 5 minutes but steals the show with his unique chest beat chant (which is bound to be the thing everyone does from this movie in 10 years time).

So is Wolf… worth watching? That depends on how much you love Martin Scorsese and, more specifically, Goodfellas. This film is very similar in pace and tone to the classic gangster movie, so if you loved that, you’ll probably love this too.

The sheer audacity of Belfort’s actions and his lifestyle make this a compelling watch. It’s a bit like watching someone get progressively drunk and seeing them do increasingly stupid things – it’s sometimes uncomfortable, and it sometimes gets very dark, but it’s often very funny.

It also depends on how you view someone who is essentially a terrible person (Belfort defrauded thousands of people) being portrayed as a comedic and generally likeable character. A lot of reviewers had a problem with it at the time, but I’d argue that Wolf… makes it clear that this is not a man to be admired.

The other problem with the movie is its length; at 3 hours long, The Wolf of Wall Street is bum-numbingly long. Fortunately, the joys of DVD mean that you can pause the film halfway through and go and practise your McConoughey chest-beats for a bit before coming back to it.

All in all, The Wolf of Wall Street is a highly enjoyable movie that is a worthy addition to the Scorsese collection.

Need some cash for new DVDs? Sell your unwanted DVDs to musicMagpie!