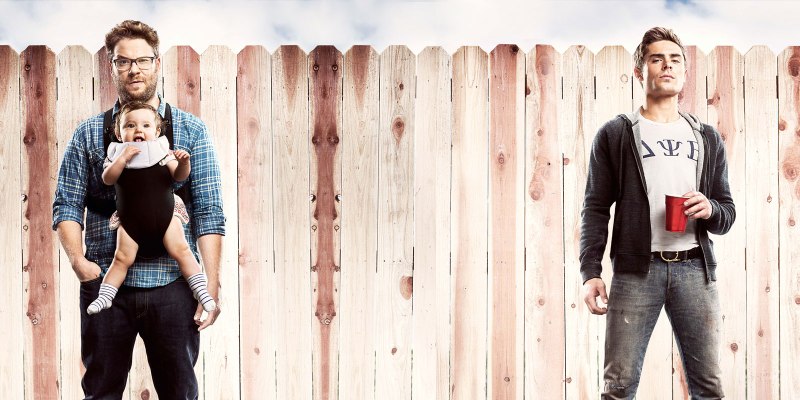 Years of watching Aussie soaps have taught us that everybody loves good neighbours. But what do people think of bad neighbours?

Easy; they hate them and regularly subject them and their loved ones to physical violence. That’s according to Bad Neighbours, at least.

Bad Neighbours stars Seth Rogen and Rose Byrne as a relatively young couple living in domestic bliss with their newborn baby. That is until Efron moves in next door, bringing with him his entire college fraternity, Delta Psi.

As you might expect, the all-night parties of Delta Psi don’t sit too well with the new parents and war soon breaks out…

Bad Neighbours is ultimately quite a strange film. On the one hand, it’s a gross-out comedy of the highest order, with a near-constant stream of jokes about privates, partying and babies nearly eating contraceptives.

If you’ve seen any Seth Rogen film (or any frat-based comedy, for that matter), you’ll more or less know what to expect. Think Knocked Up meets American Pie meets This is 40 and you’re not too far off Bad Neighbours.

Rogen is his usual likeable, laid-back self while Rose Byrne complements him well as his lovely-but-foul-mouthed wife. Opposite Rogen, Efron pales a bit in comparison but his frat-boy act is pretty funny, especially in the scenes he shares with Dave ‘Brother of James’ Franco.

The movie boasts some great scenes too, with an Ocean’s Eleven-style set-up at one of Delta Psi’s parties and a ridiculous fist-fight between Rogen and Efron being a couple of the highlights.

Yet beyond the gross-out humour, Bad Neighbours is actually quite a touching and thought-provoking film about growing up. Rogen and Byrne struggle to come to terms with being parents and party (and later fight with) with the frat-boys to make up for it, while Efron doesn’t think beyond his next party, despite being close to graduation.

Most comedy movies would deal with this by throwing in an obligatory ‘touching moment’ scene (complete with twinkly piano background music), but Bad Neighbours manages to balance the sentimentality and comedy throughout; one second the characters discuss life, the next Seth Rogen is being fired from a chair by an airbag. It’s a weird but successful mix.

Bad Neighbours doesn’t break any new ground but is an enjoyable and funny film. If you love Seth Rogen and/or Judd Apatow (who isn’t actually involved in this film, but it bears all his trademarks) films, you’ll love it. But don’t dismiss it if you aren’t a fan either – you might just be surprised.