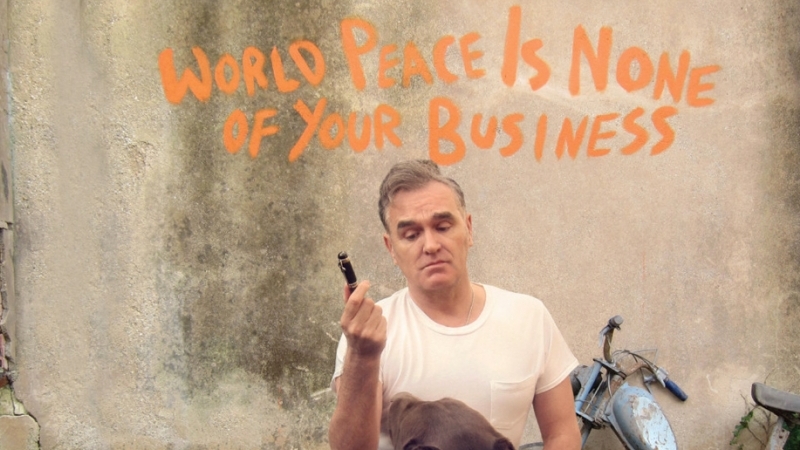 Can you hear that faint sound of moaning in the distance?

World Peace Is None of Your Business is the 10th album from Manchester’s moodiest man and a lot of people are very excited about it. So, we thought we’d take a look, see what all the fuss is about and answer some burning questions in another of our surprisingly easy guides.

Seriously? Are you joking?

Fine. Morrissey is a singer from Manchester, best known for having a big quiff and for being the frontman of The Smiths. After they broke up in 1989, he embarked on a solo career.

He’s also known for being a bit of a misery guts, which is reflected in his slightly depressing vocal style.

Oh, and his real name is Steven, although he doesn’t like people calling him that.

So why are people excited for his new album?

Because Morrissey fans are among the most dedicated in the world. Imagine One Direction’s fans, but a lot older and predominantly male, and you’re on the right track – they’re that fanatical.

There’s also the faint hope that Morrissey will produce something as good as his albums with The Smiths. His rock-focused albums to date, while well-received, have never hit the heights of The Queen is Dead or Strangeways, Here We Come.

Here’s the video for the title track:

And here’s one for Istanbul:

What are critics saying?

On the whole, they seem to like it. Alexis Petridis of The Guardian gave it 4/5 stars, while Q Magazine and the New York Times have been pretty kind about it too. On Metacritic, it currently holds a score of 75, which isn’t too bad at all.

Of course, it’s still not as good as his material with The Smiths. But seeing as their last album was released over 25 years ago, it’s probably time to let go.

Sounds promising. And the music is pretty lively too! Are you sure he’s miserable?

100%. He released an autobiography last year and spent over 400 pages tearing into everyone and everything, including his ex-Smiths bandmates. A Channel 4 documentary offered a rare insight into his day-to-day life too, which turned out to mainly consist of moping around the sunny streets of Los Angeles (where, somewhat bizarrely, the famous misanthrope has chosen to live) and getting his trademark hair trimmed.

Anything else I should know?

Never, ever, ever eat meat around Morrissey. Over the past few years, he’s compared meat eaters to murderers and paedophiles, while he urged one arena in America to close all of their meat-selling food vendors before one of his concerts.

If you’ve got any Morrissey or Smiths albums that you haven’t listened to for a while lying around, why not sell them with musicMagpie?

View all post by Chris Smith.
← We Probably Won’t Be Recieving Many Copies of Robin Thicke’s New Album…
The Surprisingly Easy Guide to Surviving the Planet of the Apes →