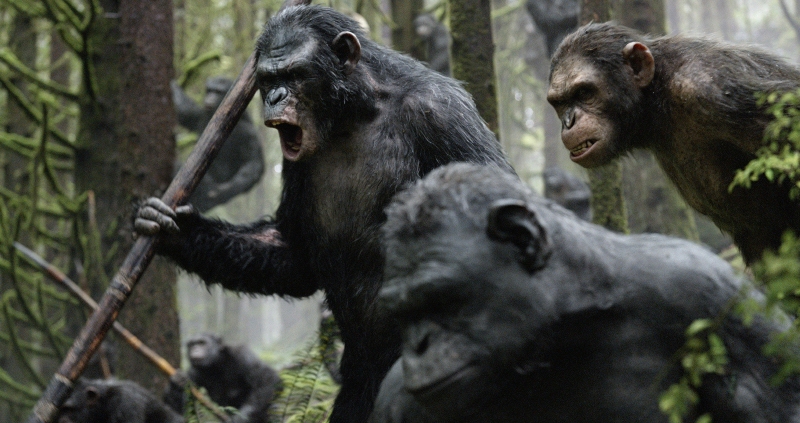 The Surprisingly Easy Guide to Surviving the Planet of the Apes

If we told you that apes are going to overthrow humanity and take over the world, you’d probably tell us to calm down and stop watching so many movies.

But, with Dawn of the Planet of the Apes coming out today, there has been a lot of chatter about the actual prospect of our simian friends rising up and enslaving us all. And it makes for quite scary reading…

The main headline is that Planet of the Apes is completely possible in real life because, against all better judgement, scientists have been implanting human DNA into animal embryos. They’ve only been working on mice so far, which admittedly makes Biker Mice From Mars the more realistic scenario, but apes are just around the corner. And once that starts, it’s only a matter of time before they can handle guns and plan battle tactics…probably.

So, in preparation for our certain doom, here is the surprisingly easy guide to surviving a planet ruled by apes.

Hoard as many bananas as humanly possible

As intelligent as our ape conquerors may be, no amount of chess and casual slaughter is going to override their primal desire for bananas. Therefore, the man who has the most bananas on the planet of the apes is going to be very powerful indeed. He might not even have to work as a slave!

So, sell your DVDs with musicMagpie now and start buying as many bananas as you can.

Just remember, though, that the apes might get really angry and steal all your bananas by force. We didn’t say this would be easy.

We don’t when the apes will take over the planet. It could be in 20 years’ time, 30, 50 or 100. Either way, if you stop shaving now (that includes you, ladies) you should look sufficiently like an ape to survive when the unfortunate day arrives.

And if anyone asks why you haven’t shaved, point them this way. They’ll understand.

But consider this: if you marry someone from another country in today’s world, you can eventually apply for citizenship of that country. So, if the apes decide to keep our conventions (and why wouldn’t they?), marrying a monkey means that you’ll be granted citizenship of the planet of the apes and thus won’t be made a slave. You might even get a nice job in the civil service!

Become a hilarious ‘animal’ sidekick in the movies

As it stands, most people find apes very, very funny. They’re cheeky, and they get up to all kinds of antics, and they’ve got funny little faces and…well, you get the picture.

With the roles reversed, who will play the part of the cheeky simian sidekick in slightly rubbish comedy movies? The apes might pick a completely different animal to succeed them, but we like to think humans will be the 1st in line. And if that is the case, you’ll want to be cast for the sake of your survival.

So, practise gurning and silly walks right now, even if you’re at work or school. You’ll be glad you did.

According to a scientific report, millions of years of evolution have made apes naturally afraid of snakes, even if they don’t actually know what they are.

Just remember to buy one that’s not going to eat you too.

Never, ever, carry around food

Apparently, the leading cause of monkey attacks in the world is people carrying around food and not giving the monkey some.

Bop them on the head with a stick

It makes them run away, according to workers at Indian temples who swear by the technique.

We don’t know about you, but we’re suddenly feeling a lot better about this global ape domination thing!

Share your tactics with us in the comments below, and enjoy Dawn of the Planet of the Apes.

Don’t forget, you can always make some emergency ape survival cash by selling your DVDs with musicMagpie too!