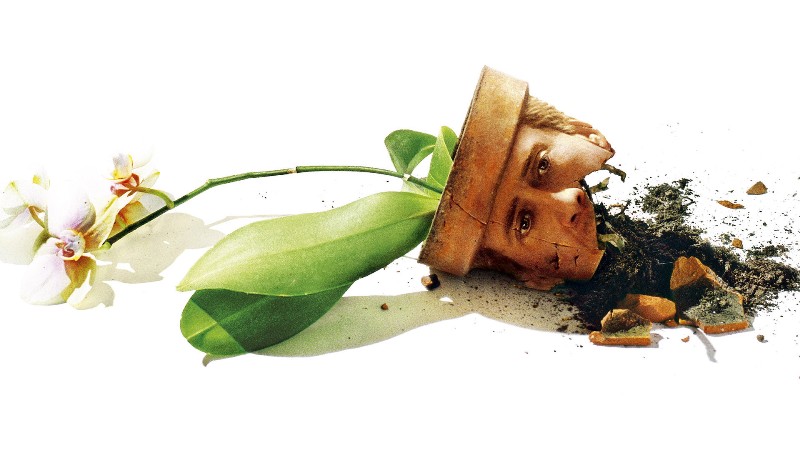 What is the best film adaptation ever? Here are some contenders.

This time, let’s talk adaptations. Taking an existing source material and adapting it to another form (be it book, cinema, radio, TV etc.). Obviously we are familiar with some adaptations such as the Harry Potter film series, the Lord of the Rings trilogy, The Godfather films, the James Bond series and most of Stanley Kubrick’s filmography (each one had a book or other such source material to form the basis).

There’s also cases of remakes (using the original feature’s screenplay), adaptations of TV shows and even hybrids of the two.

So while we’re at it, let’s count down five adaptations…

I thought we’d go Meta for our first entry on the list. You may not know this, but I list Charlie Kaufman as one of my writing influences due to his surrealist deconstructions of narrative and his out-there storylines.

Along with his original works Being John Malkovich and Eternal Sunshine of the Spotless Mind, Adaptation stands alongside the best of his oeuvre with its comedic takedown of the adaptation process (makes a good companion piece to Birdman).

Firstly, this film does not have anything to do with its source material, a non-fiction book about the 1994 arrest of horticulturist John Laroche, except it being used as a main plot device.

Instead, we are treated to a surrealist storyline of Charlie Kaufman (played by Nicolas Cage in one of the few times where he’s not delivering an over-the-top recital of the alphabet or screaming about bees) dealing with writer’s block while his (fictitious) twin brother Donald (also played by Cage) is riding high with the screenplay he’s penned about a serial killer.

The rest of the cast is also fantastic, including Meryl Streep as author Orlean, Brian Cox as writing guru Robert McKee and of course a tour de force from American Beauty’s Chris Cooper as Laroche himself. It’s a peculiar beast in the realms of adaptations, but it’s worth a look.

Of course, we must not forget graphic novels when we talk about the adaptation process.

After all, in this current decade, it is hard not to with the likes of the Marvel Cinematic Universe (one of whose entries is an honourable mention) and that of DC Comics (then again, cinematic universes are nothing new, given it was Universal’s bread and butter during their horror movie heyday in the thirties and forties). All triggered off by two features released in the year of our lord 2008, Iron Man and the subject for this entry, The Dark Knight.

A lot has been said on this feature, so I shall be brief in my assessment. Nolan sets the standard for this feature with an epic plot dissecting what it means to be a vigilante and the duality of good and evil.

Fans of the comics will note the parallels and cues taken from such storylines as The Long Halloween (in particular Harvey Dent’s transformation into Two-Face) and The Killing Joke (the second film in the series to use it as inspiration and because the Joker is the villain, duh).

The action sequnces, cinematography and camerawork are a sight to behold, enough for one to draw parallels with Michael Mann’s crime opus Heat (which funnily enough was the main influence behind the film).

But the crowning achievement of the feature is the performance of Heath Ledger as the Clown Prince of Crime himself, taking the character to a more psychotic and deranged level than most performers before him (bringing him into the top three interpretations of the character along with Jack Nicholson and Mark Hamill), observe some of his monologues and you’ll see.

Anyway, that’s enough about the film, onto the next entry…

We all know Shakespeare adaptations. Countless takes on the Immortal Bard’s works including Macbeth (tackled by both Orson Welles and Roman Polanski), Henry V and Hamlet the latter two being filmed by both Sirs Lawrence Olivier and Kenneth Branagh.

We even get some variations on plays, such as updates to modern times or even different perspectives, as demonstrated by Orson Welles in Chimes at Midnight.

But what you might not know is some plays can be indirect adaptations. Among the many examples are The Lion King (Hamlet), Gus Van Sant’s My Own Private Idaho (Henry IV Parts I and II), Akira Kurosawa’s Throne of Blood (Macbeth) and Ran (King Lear) and not forgetting this entry’s main topic Forbidden Planet.

Firstly, this film is worth the purchase to gaze in sight of the iconic Robbie the Robot, setting the standards for movie robots that would later try to imitate (but rarely better) the machine featured here.

Secondly, this film features on the list as an indirect adaptation of Shakespeare’s The Tempest with a group stranded on a distant planet with a scientist (in place of the wizard and deposed Duke Prospero). Finally, the effects are impressive, including a hand drawn animation of the film’s beast caught in the beam of the trap. Let’s move on…

Yes, you are reading this correctly. The granddaddy of the slasher movie genre was adapted from a novel, which in itself was based on real-life serial killer Ed Gein (who also inspired The Texas Chainsaw Massacre and the novel and film adaptation of The Silence of the Lambs).

Then again, there isn’t much I can say about this film that hasn’t been said by millions of other historians and cinephiles over the years, only the film isn’t as violent or explicit as its source material (due to the production code of the time).

No doubt, this will probably already be in your consciousness thanks to the number of pop-culture references made to it over the years (I’m looking at you Matt Groening). However, I think I can add the fact that it was the first movie to feature a toilet being flushed on screen.

So, like Alfred Hitchcock during the film’s promotion (check out the film’s original trailer on YouTube), I shall be secretive about what’s going on within this feature, and let you find out for yourself.

Now onto our final entry: David Mamet’s adaptation of his own stage play Glengarry Glen Ross.

This was a film made for a terrific ensemble performance and we are treated to just that. From stalwarts like Jack Lemmon, Alan Arkin and Al Pacino (oddly enough, this film came out the same year as the film that finally netted him an Oscar Scent of a Woman) to rising character actors like Alec Baldwin, Ed Harris, Jonathan Pryce and  Kevin Spacey.

The dialogue is also cracking and sharp, as you’d expect from Mamet, in particular Alec Baldwin’s cameo as the Mitch and Murray representative, not featured in the actual stage play. So much so that some of Al Pacino’s lines are used in soundboard crank calls uploaded to YouTube, which demonstrates the film’s longevity.

So check this film out and remember, ABC – Always Be Closing.

Fun fact: One of Mamet’s next projects was scheduled to be a biopic of silent comic Fatty Arbuckle but has since vanished from the radar following the death of intended star Chris Farley.

← What is the best superhero movie of all time? [updated with Wonder Woman and Thor: Ragnarok!]
5 movies that are guaranteed to make you cry →