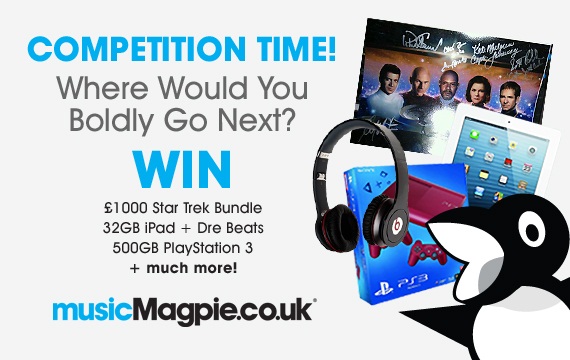 ‘Where would you boldly go next’ COMPETITION!

This competition is now closed.

We’ve got a fantastic Star Trek bundle to give away along with a 32GB iPad, a PS3 plus loads more great prizes, read on to find out how to enter this fantastic competition…

We’re super excited about the launch of the first ever fully interactive Star Trek Fact and Fiction Navigraphic and to celebrate we’ve decided to give you the chance to WIN an unbelievable Star Trek prize bundle plus loads more prizes!

To get your hands on this one-off super Star Trek bundle plus a chance to win a 32Gb iPad 4 or a 500GB PlayStation 3 + loads more prizes that are up for grabs, just tell us… “Where would you boldly go next?”

To enter simply choose one of the following Star Trek locations and tell us why you’d like to go there in the Facebook comment box at the bottom of the page… EASY!

Prizes up for grabs…

The answer that receives the most Facebook likes wins… simple! So share your answer with all your friends by selecting ‘post on Facebook’ and if they agree with where you would boldly go next, then you could be a lucky winner of one these amazing prize bundles! Please submit your entry in the Facebook comment box at the bottom of this page or head over to the Star Trek Navigraphic and enter there!