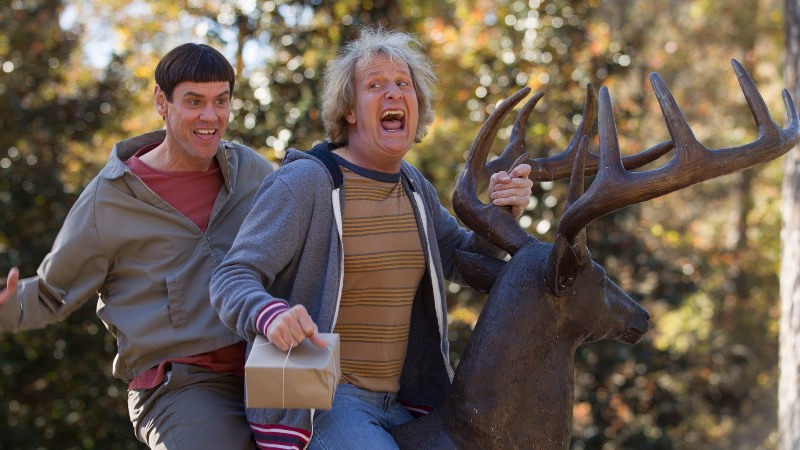 Christmas is just around the corner, which means this month is chock-full of new cinema releases, new DVDs and a few new CDs too! Click one of the categories below to view this month’s releases.

The penguin super spies from Madagascar (AKA the best characters in the series) team up to stop an evil Doctor from destroying the world. Kids (and some adults!) will love it.

Jason Reitman, the director of Juno, returns with this exploration of the internet, and how it’s changed the ways we communicate with each other. It’s funnier than it sounds.

Two words: Bill Murray. Murray plays a lovable old grump who ends up becoming a mentor to a young boy whose parents have just divorced.

The Hobbit: The Battle of the Five Armies

The concluding chapter of The Hobbit sees Bilbo and the gang go to war against various nasties, including the terrifying dragon Smaug. It’s your last chance to catch Ian McKellen as Gandalf too!

Dumb and Dumber To

Night at the Museum: The Secret Tomb

Ben Stiller spends another night at a museum as he tries to unite the world’s historical figures in order to save the magic powers of the Tablet of Ahkmenrah. Ricky Gervais, Rebel Wilson and the late Robin Williams co-star.

Ridley Scott’s biblical epic tells the story of Moses (played by Christian Bale) as he leads 600,000 slaves to freedom from Ancient Egypt (and some nasty plagues).

Jamie Foxx and Quvenzhané Wallis (try saying that after a Christmas sherry or two) star in this remake of the classic musical.

Angelina Jole’s 2nd film as a director tells the tale of Louis Zamperini (played by Jack O’ Connell), an Olympic runner who was taken prisoner during the Second World War.

Take That Version 3 (minus Jason Orange) release their 7th studio album, but will it be any good without Orange? The fact they’re currently top of the singles chart suggests that it will be…

Good old fashioned rock n’ roll; no more and no less. Get your air guitar ready.

Monuments to an Elegy – Smashing Pumpkins

The Smashing Pumpkins return with their 9th album, which is part of a trilogy titled Teargarden by Kaleidyscope. Corgan is the only original member, with guitarist Jeff Schroeder the only other member of the band (although Tommy Lee of Motley Crue fame plays drums).

You Got It All – Union J

It’s a big month for people who scream at boybands, with Union J releasing their latest album just a week after McBusted.

This online driving/RPG game sees you driving around the US trying to take down criminal gangs. It’s like Need for Speed but slightly bigger, basically.

Tales from the Borderlands (online only)

After taking home numerous Game of the Year awards for The Walking Dead (and impressing critics with The Wolf Among Us), Telltale Games are turning their hand to the Borderlands universe. Episode One is released on the 3rd.

Lara Croft and the Temple of Osiris

This Tomb Raider spin-off allows 4 players to explore tombs at the same time. It was released earlier this year online, but is finally getting a physical release.

Most of the major manufacturers have shown their hand for the year, so there aren’t many gadgets coming out this month. There’s still plenty to choose from this Christmas though, including the new iPad Air, the Tesco Hudl and the iPhone 6. Check out our favourite tablets in this post, and sell your electronics by clicking here.

1st: Planes, The Inbetweeners 2, One Direction: Where We Are, Hercules, Step Up 5.

If you’re planning to go and see – or buy – any of this month’s new releases, why not sell some of your unwanted CDs, DVDs and Games with musicMagpie?

← 9 upcoming sequels to classic movies (that might actually be quite good)
This week’s music news: Dancing on the ceiling at Christmas, watching Gogglebox. →