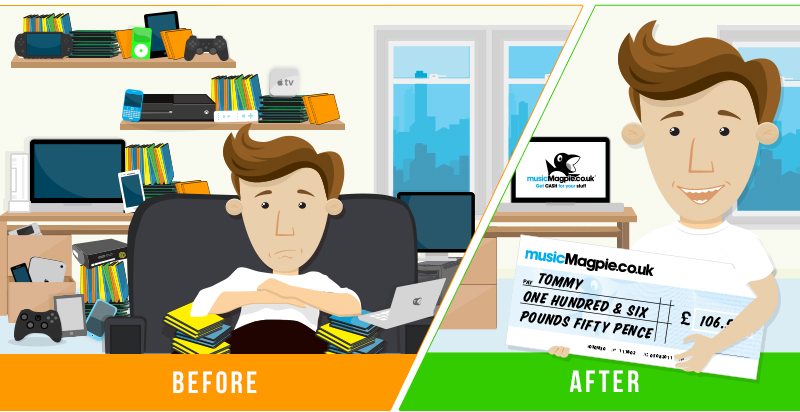 5 reasons to have a big half-term declutter

It’s half term next week, a time to rest, relax and reflect on the year so far. It’s also a pretty good opportunity to take a look around your home and come to the sudden realisation that you barely use half the stuff you own.

We know you probably don’t want to spend your week off (or weeknights, if you aren’t off…)  tidying up, but we promise you won’t regret it if you do. Here are a few reasons to spend (some) of your half-term decluttering…

Our Nation of Clutter survey suggested the average home’s clutter is worth £275. That’s a lot of unclaimed cash to leave lying around! Even a small decluttering session could end up making you a decent amount of cash (use our valuation engine to find out just how much!)

It’s also worth bearing in mind that every hour you spend decluttering is another hour you aren’t out spending money. You’ll be rolling in it!

You’ll feel better about yourself

Of the people who took our survey, over half felt that clutter has a negative impact on their life. Some believed that tidying up would make them happier, while 8% felt that decluttering would improve their sex life (although we won’t make any guarantees).

It’ll give the kids something to do

Sick of the kids whining about being bored? Get them to help you tidy up!*

*you may have to bribe them with money, sweets and/or video games. You could always sell their games online to pay for said bribe, though…

It’s too cold to do anything else

Seriously, have you been outside recently? It’s freezing! But of course, no-one wants to spend their entire half-term sitting in front of the TV and slobbing so having a good tidy up is the perfect compromise. You might even work up a sweat, which’ll save you money on heating too!

While the point of decluttering is to make your home tidier, it’s unrealistic to think you’ll never buy anything ever again. Getting rid of stuff now means you’ve got more space for new stuff in the future, and there are a ton of amazing games, movies and albums coming out over the next couple of months!

If you need a bit of extra motivation, check out this post we published before the last half-term holiday – it’s full of useful tips!