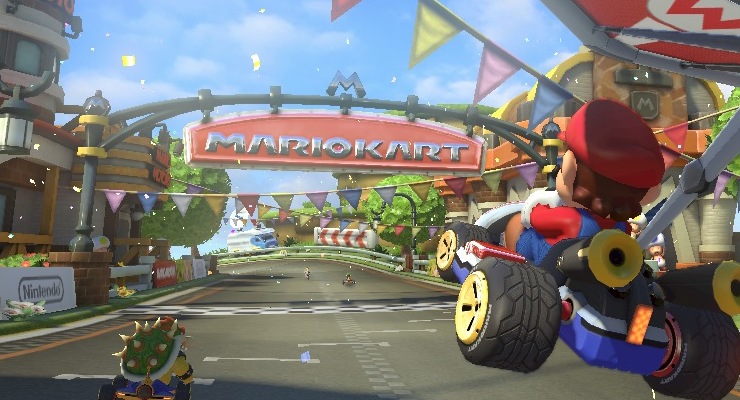 Ask someone what they think of when you say ‘Valentine’s Day’ and you’ll probably get the same few answers: roses, love hearts, buying flowers at the petrol station because you forgot even though it falls on the same day every flipping year.

Very few people would say video games though. But why not? A good co-op game can bring a couple together better than any romcom and is a lot cheaper than going out for dinner.

So, here are 10 epic video games you can enjoy with your other half this Valentine’s Day (well, 9 technically – you’ll see why).

If you’ve ever thought about forming a couples band a la Arcade Fire or…erm, Abba, this is the game for you.

Well, it is kind of. Unfortunately, you can’t play co-op but you can take each other on in head-to-head, and it’s still pretty cool shredding in your living room with your other half.

Just try not to laugh too much when they fluff Paint It Black for the 10th time, and don’t get too determined to prove how much better you are at playing plastic guitar…

The best Mario Kart ever is simple enough for anyone to enjoy, yet fun enough to keep even the most hardcore of gamers entertained.

Playing it with your other half has its dangers, however; there’s always a chance you could tank them with a red shell, or they could get upset when you keep beating them (or vice versa).

However, there is literally nothing more romantic than hitting a computer opponent who is threatening to overtake your partner and letting them speed off into the sunset. Not even a night in Venice listening to Barry White.

Prove that you’re the smartest couple around with a spot of cooperative puzzle solving!

It’s probably going to take a little bit of explaining the whole ‘using portals to escape a lab’ concept to a newbie and you’ll probably bicker over the best solution, but that’s a small sacrifice to make for getting to play one of the best video games of all time on Valentine’s Day.

Castle Crashers is 8 this year but it’s still one of the best co-op games around – and it’s really easy to pick up too.

The set-up is simple: a dark wizard has stolen an important gem and kidnapped 4 princesses. Your job is to team up with 3 other knights and save them by bashing in as many baddies as possible in a side-scrolling beat-em-up fashion.

With up to 4 player co-op available, this is a decent shout for a double date too!

At some point in their lives, every couple has ‘the talk’: who would survive longest in a zombie apocalypse, and how?

Well, here’s your chance to find out. Left 4 Dead 2 drops you and your other half in the midst of a brain-munching horde and asks you to get to the end without becoming zombie chow.

Just keep in mind that this one is pretty intense and probably not suitable for inexperienced gamers.

Call of Duty: Any of Them

The ultimate online FPS pits you and your other half against the entire world, as you battle to prove that you are the king and queen of shooting people and/or calling them names over the mic. Stick to the game modes where you’re on the same team, though.

If the idea of playing online doesn’t appeal, you can always tackle a co-op campaign instead.

Or any of the LEGO games to be honest. They’re based on films most people know, they’re super easy to play and, most importantly, they’re really, really fun too.

Unless your other half thinks LEGO is for kids, which sounds like a good enough reason to end the relationship there and then to be honest.

Lovers in a Dangerous Spacetime

Lovers In A Dangerous Spacetime is possibly the most romantic game of all time, which isn’t that much of an achievement considering most games are about killing people, but hey ho.

LIADS is a co-op adventure in which you and your other half command a spaceship sent to fend off the forces of anti-love. The twist? You have to control each section of the ship separately. So one of you does lasers, the other does shields, engines, and so on.

It’ll cause arguments and bickering but it’s all worth it for the moment you defeat the baddies and prove that, ultimately, love conquers all. D’aww.

PvZ: Garden Warfare is a lighter take on the first person shooter, based on the ridiculously popular tower defense game everyone and their mum has played.

Although there are numerous game modes for two players, our favourite is Garden Ops in which you play as a pair of plants and fight off waves and waves of zombies.

Can’t get a date? Don’t worry: just get married in Skyrim! Yep, you can genuinely get married and move in with a hottie of your choosing.

And it’s actually a pretty sweet deal: there’s no arguing over who has to do the dishes, no nagging about leaving your pants on the floor and you can pretty much head out on adventures whenever you want without so much as a stern look.

You might get a couple of weird looks when you introduce your ‘spouse’ to friends and family, though.

Which video games will you playing this Valentine’s Day? Let us know in the comments!

And if you’re thinking about having a clear out before Valentine’s Day, sell video games with musicMagpie. It’s quick and easy: just click below to get started.