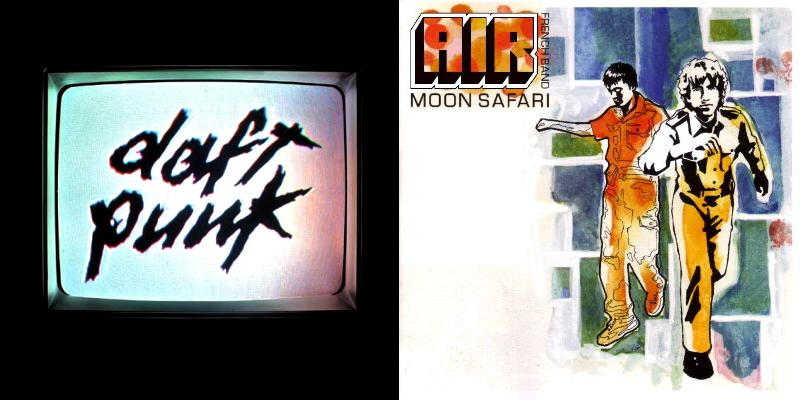 Vinyl Respin: Get 10% Off Human After All and Moon Safari!

Every week, we respin two classic records and give you the chance to save 10% off both of them with the code RESPIN10. This week, we’re crossing the Channel to revisit two of our favourite French electronica albums…

France has given the world many wonderful things: croissants, arty movies, Thierry Henry. One of its finest exports, however, is electronica.

There’s a strong correlation between ‘being French’ and ‘being able to produce an absolute banger’. Over the past 20 years, acts like Justice, M83 and Yelle have all achieved critical and commercial success. The two biggest success stories, however, are undoubtedly Daft Punk and Air.

This week, we decided to respin two of their albums: Human After All and Moon Safari.

Human After All – Daft Punk

Human After All is Daft Punk’s ‘raw’ album. It was produced in just six weeks, using just two guitars, two drum machines, a vocoder and an 8-track recorder.

This minimalistic approach to recording led to some of the French duo’s meanest and leanest songs to date, with songs like Robot Rock and Technologik (the album’s two big hits) based off catchy riffs and pounding, mechanical drumbeats.

Human After All is also quite a bit darker than Daft Punk’s other records. Steam Machine – with its hypnotic industrial beats and whispered vocals – wouldn’t sound of place on a Nine Inch Nails record, while The Brainwasher sounds like it came straight out of a dystopian techno-thriller about a authoritarian society (1984 was apparently a major influence on the record).

This venture into darkness was intentional, with Thomas Bangalter describing Human After All’s themes as ‘fear’ and ‘paranoia’ and claiming that it’s ‘not something intended to make you feel good’. Blimey.

It’s not all doom and gloom though. The aforementioned Robot Rock and Technologik are among two of Daft Punk’s most danceable songs, while Make Love and Emotion see the duo experiment with a more chilled vibe. The former sounds like dinner jazz performed by robots, while the latter plays out like a ballad written by a self-aware machine that’s just experienced heartbreak for the first time.

Although it received mixed reviews at the time, Human After All’s popularity has increased majorly over the past couple of years. That’s thanks in no small part to the Alive 2006/07 tour, which contrasted the songs against the duo’s earlier work to stunning effect.

Human After All isn’t Daft Punk’s most accessible record but it’s definitely their most underrated.

The solitary goal of a significant portion of electronic musicians is to make people dance. They employ hard beats, synth melodies and pounding bass lines to make people’s limbs move, even if said movement is involuntary.

Air, however, tried something a little different. Rather than soundtracking a night in Ibiza, they decided to soundtrack the morning after; the time between watching the sunrise and waking up in a sun-drenched paradise feeling a little worse for wear.

Even if you haven’t listened to this record, you’ve probably heard some of the tracks. Sexy Boy was a huge hit internationally and has appeared on countless adverts, while Kelly Watch The Stars has soundtracked TV shows across the globe.

Other highlights included the trip-hop-influenced Talisman (which features strings recorded at Abbey Road), the chilled indie-rock vibes of Remember and the beautiful All I Need with Beth Hirsch on vocals (an addition the band’s Nicolas Godin described as making them sound like a space-age Carpenters).

Moon Safari was one of the biggest albums of the 90s, inspiring legions of imitators that never quite managed to combine electro and loungecore quite as well as Air (to be fair, Air never topped it either). Its influence can still be heard even today, with Tame Impala’s Currents owing a debt to Air’s work.

Moon Safari is one of the best records of the past 20 years and sounds just as great today as it did in 1998!

You can get 10% off both Human After All and Moon Safari on the musicMagpie Store right now with the code RESPIN10. Click below to start shopping!

Please note: this offers expires at 9am on Thursday 9th February.