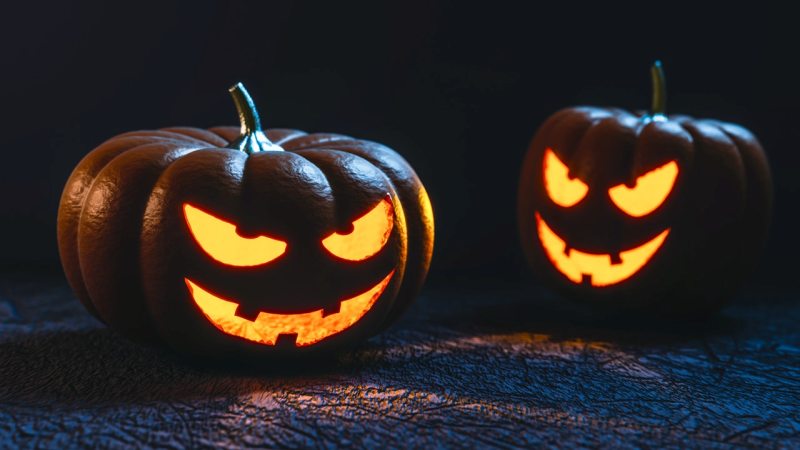 Halloween is lurking ever closer, which means it’s time to open the horror vaults and recommend a few classic films to scare yourself silly with.

Dim the lights, find yourself a nice spot behind the sofa (the only place you’re safe, obviously) and prepare to scream at…

The Nightmare Before Christmas

…alright, so this isn’t exactly ‘sleep with the light on’ material, and some people would argue that it’s actually a Christmas movie. But forget about them: The Nightmare Before Christmas couldn’t be more of a Halloween movie if it tried.

Exhibit A: it’s the brainchild of Tim Burton, the king of creepy-but-cute Halloween fodder. Exhibit B: it’s set in Halloween Town, which is literally the home of Halloween.

Ahem… anyway. If you’re not familiar, The Nightmare Before Christmas follows ‘Pumpkin King’ Jack Skellington as he tries to bring Christmas (located in a different town) to Halloween Town by kidnapping ‘the Sandy Claws’. However, poor old St. Nick falls into the wrong hands and it’s up to Jack to save him.

It’s a hugely entertaining movie that wraps up in a timely 71 minutes, making it the perfect flick to watch before you head out for a Halloween night out. Plus, it’ll get you excited for Christmas at the same time.

From one iconic Halloween character to another, although it’s fair to say that Michael Myers is a little bit scarier than Jack Skellington.

John Carpenter’s classic 1978 slasher flick sees everyone’s favourite lumbering serial killer escape from an institution and return home to do what he does best: scare the living daylights out of everyone then murder them (most of the time).

His target this time is poor old Laurie Strode (played by Jamie Lee Curtis), an unsuspecting babysitter who ends up spending Halloween trying to escape the clutches of Ol’ Pale Face. Meanwhile, Michael’s doctor tries to catch up and convince him that this murdering lark isn’t worth it.

This stone cold classic has influenced countless slasher films and remains surprisingly terrifying to this day.

Compared to zombies, ghosts and serial killers, witches are criminally underrepresented in the movie world.

Hocus Pocus is one of the best of the bunch, mixing comedy and horror into a family friendly Halloween flick.

It follows a young boy who moves to Salem and accidentally resurrects three witches who want to steal the souls of every child in the town. Oh dear. Luckily for the kids, the trio (played by Bette Midler, Kathy Najimy and Sarah Jessica Parker) struggle to adapt to the modern world.

Hocus Pocus received bad reviews after release but thanks to persistent Halloween showings, it has become a bona-fide cult classic. If blood and guts ain’t your thing, this is the Halloween movie for you.

If you’ve never seen Psycho, you’ll still be familiar with its most famous scene: the murder of a young woman in the shower, soundtracked by the most iconic orchestral stabs in history.

Despite the brutality of the shadow behind the shower curtain sequence, Psycho isn’t the gorefest critics at the time made it out to be (although it did inspire a lot of them).

In fact, it’s more of a psychological thriller; Alfred Hitchcock is much more concerned with exploring the psyche of motel owner and mummy’s boy Norman Bates than he is depicting senseless violence.

That doesn’t make Psycho any less tense or terrifying though. Thank goodness we’ve got Tripadvisor to warn us about dodgy motels these days.

According to a study by the Mental Health Foundation, over 30% of British people suffer from insomnia. While there are a number of factors behind that figure, we reckon A Nightmare on Elm Street is at least partially to blame.

Wes Craven’s timeless horror sees the young residents of an American suburb terrorised by Freddy Krueger, a disfigured monstrosity with claws for fingers. However, Freddy only appears in nightmares; if you stay awake, you’re safe.

The horrifying concept is executed to perfection by Craven, with some truly memorable sequences and an iconic villain. While the sequels (and Freddy) got increasingly ridiculous, the original Nightmare is still… well, a nightmare.

Night of the Living Dead

AKA the film that spawned the entire zombie phenomenon and gave millions of lazy people an easy Halloween costume option.

Although Dawn of the Dead is arguably the better film, Night of the Living Dead has a much stronger Halloween vibe. The original, which was released in 1968, hasn’t aged that well and is a perfect mix of horror and kitsch as a result.

You’ll no doubt know the deal here if you’ve ever seen anything mildly zombie-themed; a group of people are attacked by a sudden rising of flesh-hungry dead folks and are forced to hide out and survive by any means necessary. Night of the Living Dead, of course, came up with the idea first and is arguably one of the most influential movies ever made.

If the original isn’t scary enough for your liking, check out the 1990 remake instead (or one of the many, many unofficial remakes; the film is in the public domain, which means anyone with a camera and a few zombie outfits can have a pop at making their own version).

If you’ve ever felt tempted to play with a ouija board, we highly recommend watching The Exorcist first. It’s the tale of a young girl (played by Linda Blair) named Regan who is possessed by the Devil and starts exhibiting some terrifying (and occasionally unintentionally hilarious) behaviour.

It also features some of the most disgusting visual effects committed to screen, which might explain why it was banned for over a decade on these very shores. Fortunately, the ban was lifted and The Exorcist was finally released again in 1999.

By 1996, the slasher movie was played out to the point of parody; Freddy was a joke, Jason was worn out and Michael Myers was fighting (and losing to) a young Paul Rudd while bogged down with some sort of Druid mythology.

Enter Scream. While it shares many of the standard slasher movie tropes (the good looking youngsters, the seemingly invincible murderer, the violence), it employs them with its tongue firmly in its cheek.

As such, it’s a little less edgy than its peers but arguably more entertaining. The perfect Halloween movie!

Ghost movies are ten-a-penny these days but few match the sheer horror and excitement of Poltergeist.

Tobe Hooper’s classic sees a family tormented by a horde of angry ghosts who abduct their youngest daughter. Together, they have to bring her back.

Although Hooper is listed as director, there are a lot of rumours that Stephen Spielberg (who produced the film) also had a hand in the direction of the film. He wasn’t officially allowed to direct due to an agreement in his contract for E.T.

And finally, the big daddy of found footage horror movies. Released in a more innocent time (1999, to be precise), pretty much everyone was convinced that The Blair Witch Project was real thanks to an ingenious marketing campaign.

Although we know better now, The Blair Witch Project – which follows three students as they investigate the murders of local children and the witch of the title – is no less unnerving. You certainly won’t want to go anywhere near the woods for a while after.

What is your favourite Halloween movie? Let us know in the comments!

You can find all of the films in this post, plus many more, on the musicMagpie Store right now! Prices start from just £1.09, you’ll get FREE delivery with all orders and we’ve got some amazing multibuy offers too! Click below to buy horror DVDs today – why wouldn’t you?