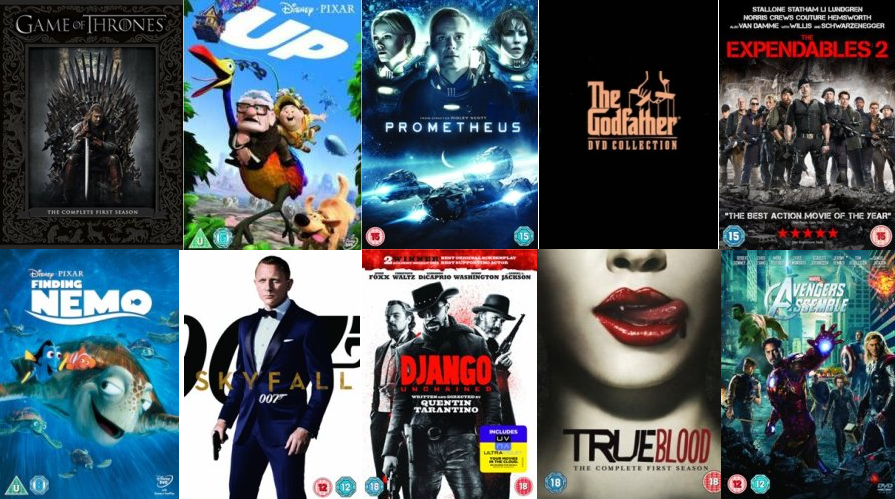 But why are people selling these DVDs? Here are a couple of theories…

HBO’s sex-and-swords drama has become a massive hit, prompting lots of people to invest in the box set and find out what all the fuss is about.

Sadly, not everyone loves Game of Thrones as much as we do, which is why we receive a lot of series 1 boxsets!

We’ve cried so many times at the opening 10 minutes of Up that we’re not sure we have any tears left to shed. Maybe other people feel the same way.

One word: disappointment. The prequel to Alien had a lot going for it: an excellent cast, a massive budget and original Alien director Ridley Scott at the helm. So how did it end up being such a big mess?

No-one wants to sell this really, we just made them an offer they can’t refuse… *grabs coat, leaves through nearest exit*.

Stallone and co’s latest adventure is out in the cinemas at the moment, which might have prompted people to sell this – either because they want the money for a cinema ticket, or they’ve just remembered that night of drunken madness when they bought the DVD because they’d spent the evening doing rubbish Arnie impressions.

There’s only so many times you can watch this without shouting ‘oi, Marlin, he’s in the [SPOILER REMOVED FOR THE PROTECTION OF CHILDREN EVERYWHERE]’ at the screen.

Oh look, a James Bond film. What’s going to happen in this one? If we were gambling folk, we’d pluck for lots of women, lots of guns and the occasional smug one-liner.

In all seriousness, though, Skyfall was a welcome return to form for Daniel Craig’s gruff superspy.  But we can see why people might be getting a bit bored of the formula…

Tarantino’s Western revenge-epic is nothing short of brilliant. But there is one thing that would single-handedly make us want to sell this as quickly as possible, and that is Tarantino himself. What on earth is this accent, Quentin?!

True Blood, like Dexter, started with a lot of promise that gradually dissipated over the course of several seasons. It could have been a classic, but was eventually overshadowed by bigger and better shows.

This year, Marvel has released 3 movies. Next year, they’re planning to release 2 more (including the new Avengers movie). The year after, they’re releasing another 2, and a further 3 in 2017. Basically, if you don’t start selling your Marvel DVDs now, they’re eventually going to take over your house.

Got any of the titles in our chart? Then join other people and sell them for cash right now!

View all post by Chris Smith.
← 5 Cult Superhero Movies Worth Checking Out
Are movie-based video games as bad as everyone thinks? We used science to find out… →