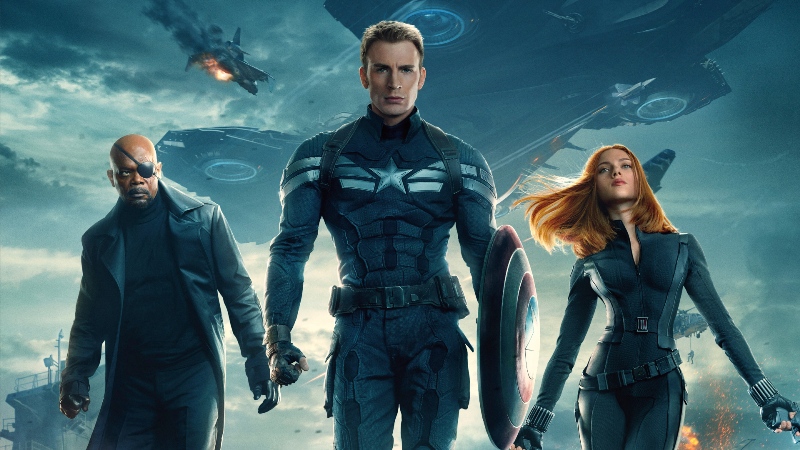 Need some Christmas present ideas? How about one of these Marvel-lous superhero movies?

We’re on a mission to make Christmas shopping surprisingly easy: we’ve already shared some of the best CDs & DVDs coming out this Christmas with you, and now we’re going to help you pick out the best Marvel DVDs to buy for kids (and big kids) too.

The Marvel Movie Universe is beloved by young and old, which makes it a Marvel DVD a fairly safe bet when shopping for stocking fillers.

Unfortunately, not all Marvel films are great. In fact, some are downright awful!

So, to help you pick the best possible present for the superhero in your life, here are 6 of the best Marvel movies. Add your own suggestions in the comments below!

Who would have predicted that a movie about a wise-cracking raccoon and a talking tree would be one of Marvel’s best movies, let alone the 2nd highest-grossing movie of 2014 (to date)?

Guardians of the Galaxy follows a ragtag bunch of intergalactic heroes as they battle a scary group of space villains, despite lacking the slickness or training of The Avengers. The result is 2 hilarious-yet-exciting hours that you’ll want to relive again and again.

Ask anyone what they think the best superhero movie ever is, and you’re likely to get the same few answers: Avengers Assemble, The Dark Knight, Days of Future Past and so on.

One movie that often slips through the net is Spider-Man 2, which is a shame because it’s easily one of the best – if not the best – superhero movie ever made.

Picking up from the relatively light-hearted Spider-Man, Spider-Man 2 heaps on a whole load of tragedy and turns the action up to 11 (the train sequence is incredible). It also introduces one of the best comic book movie villains ever, Dr. Octopus.

Unlike more recent superhero movies, Spider-Man 2 doesn’t fall into the trap of taking itself too seriously and retains much of the humour that made Spidey Marvel’s best-loved character in the first place.

Well, we can’t miss this one out, can we?

Earth’s greatest heroes (not including Batman, obviously) team up to take on Loki, a power-crazed Norse God with an English accent, and an intergalactic army of weird bug things.

Avengers Assemble takes a little while to get going, but it’s worth it once our heroes are standing side-by-side knocking 7 bells out of baddies (and each other). Plus, we finally (FINALLY!) get a decent movie version of the Incredible Hulk. Hooray!

Unlike Spider-Man, the X-Men – another notable set of outcasts from the Marvel Movie Universe – are riding high on a wave of critical acclaim thanks to a McAvoy, Fassbender and Lawrence-inspired revival.

The X-Men franchise could already claim to have one of the best movies in the genre long before Days of Future Past, however: X2.

X2 is an incredible ensemble film that undoubtedly paved the way for the likes of Avengers Assemble and Batman Begins. Beneath an action-heavy plot lies a surprisingly intelligent social commentary on society, which should be enough to lure in even the most ardent of superhero-haters.

If that doesn’t appeal, there’s also Hugh Jackman in a career-defining performance as Wolverine.

Captain America isn’t exactly the most exciting Avenger: he isn’t as cool as Iron Man, he doesn’t have a big hammer like Thor and he doesn’t smash stuff indiscriminately like Hulk.

It’s strange, then, that he stars in two of the best standalone Marvel films. The Winter Soldier is, on the face of it, a standard Marvel movie: there’s lots of action, a ‘big’ villain and plenty of one-liners too.

However, The Winter Soldier takes quite a lot of inspiration from spy movies too – it’s a bit like a Tinker Tailor Soldier Spy, if Gary Oldman wore blue spandex and had an indestructible shield.

Kids might not enjoy it as much as Iron Man, but older Marvel fans will love it.

Given the incredible streak of movies Marvel have released recently, it’s often forgotten that Iron Man 2 was a bit of a dud. While Robert Downey Jr. was as brash and brilliant as ever, the plot had more holes than a block of Emmental (albeit with lots of explosions).

Iron Man 3 was an epic return to form, however. Tony Stark is panic-ridden after his terrifying encounter with intergalactic space beasts in Avengers Assemble, but doesn’t really have time to sit down and worry: one of cinema’s strangest villains is knocking on his door (well, blowing it up with helicopters).

Amazing, director Shane Black manages to introduce a child sidekick – a cardinal sin of cinema – and actually make it work too.

After Iron Man 2, Iron Man 3 is a return to the brash Marvel fun we know and love.

If you need to make any space in your DVD collection before Christmas, why not sell some DVDs with musicMagpie?

← 9 Surprisingly Interesting Facts About The Hunger Games – Just in Time for Mockingjay!
9 upcoming sequels to classic movies (that might actually be quite good) →