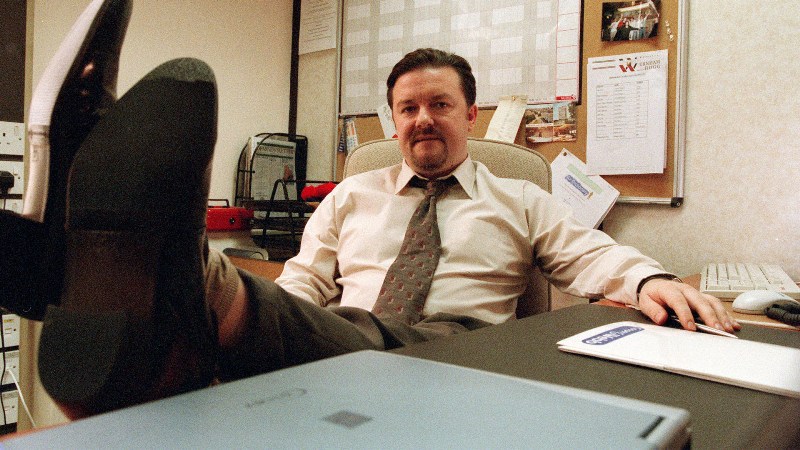 Friday Five: Are you David Brent?

Everyone’s favourite terrible boss and master of cringe David Brent is back, this time on the big screen in Life on The Road.

After leaving Slough’s premier paper merchants Wernham Hogg, Brent decides to pursue his dream of becoming a music megastar (whilst working as a cleaning products sales rep on the side) by taking 11 days holiday to tour some of Reading’s biggest venues with his band Foregone Conclusion.

A big part of Brent’s appeal is the fact we all know someone like him… and the fact that some of us are more like him than we’d like to think. To celebrate Brent’s return, here’s a quick checklist of signs that you may have turned into Slough’s favourite chilled out entertainer.

Work is an excuse to try new comedic material

Some people walk into work and see colleagues (or friends, if you’re lucky). You walk in and see an audience primed and ready to hear your latest material, which includes impressions from Mrs Brown’s Boys and misjudged jokes that may land you in hot water with HR.

If someone was to ask you to describe your role in the office, you’d classify yourself thusly: “a friend first, boss second and chilled out entertainer third”. This nugget of wisdom from the Brentmeister General might as well be etched on your gravestone: ““When people say to me: would you rather be thought of as a funny man or a great boss? My answer’s always the same; to me, they’re not mutually exclusive.”

The worst thing you can imagine is someone not finding your material funny or being outshone by someone better looking and naturally funnier than you (see: Brent vs Neil, manager of the Swindon branch).

You think this is a pretty good dance move

You’re awful with the opposite sex

If your interactions with members of the opposite sex always end in abject embarrassment or outright disaster, you might want to look in the mirror and check you haven’t sprouted a naff goatee and paunch.

Among Brent’s finest moments with the ladies include a series of horrific blind dates and some truly cringeworthy attempts to impress his new PA, including describing his cultured drink choices (“Me: lager. Finchy: lager. Gareth: lager, sometimes cider”) and showing off his football skills, which end with him stumbling over a stepover and planting his noggin right in her face.

You’re a champion of equality

Say what you will about David Brent, but his dedication to promoting equality cannot be disputed.

You’re a (terrible) artist at heart

Work is just a means to fund your real passion: art in all its forms. In your spare time, you write poetry (like the Byron-inspired classic Brent reads to Dawn), music and comedy, some of which you gift to your colleagues during work training days.

And if you ever got made redundant, you’d spend all your compensation on a cringeworthy cover of a 90s classic complete with a laughably bad video.

Relive the best of Brent with the musicMagpie Store! We’ve got both series of The Office, plus the Christmas specials, at ridiculously low prices with free delivery. Just click below to start shopping.

Buy The Office: The Complete Series and Christmas Specials on the musicMagpie Store

← Is Suburra one of the best crime thrillers ever?
This week’s new DVD releases: WWE, The Jungle Book and more! →