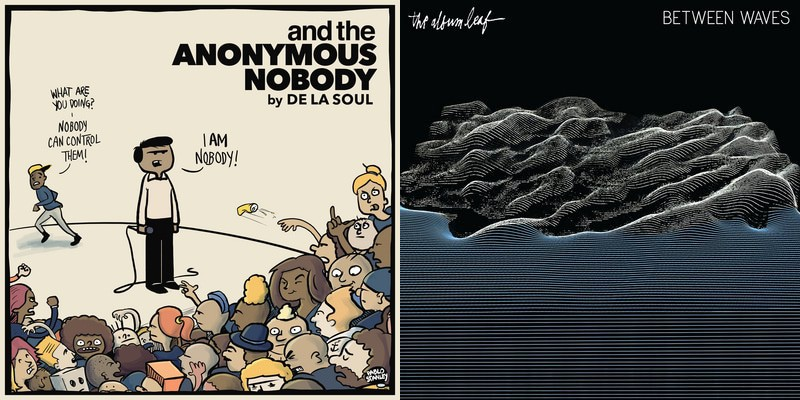 There’s a bumper crop of new albums hitting the musicMagpie Store this Friday, so let’s get straight to it!

And the Anonymous Nobody… – De La Soul

Bona-fide hip hop legends De La Soul funded their 9th album on Kickstar, raising over $110,000 in just under 10 hours. Early singles Pain and Royalty Capes suggest this’ll be another slice of fun-loving old school hip hop, although guest appearances by David Byrne and Justin Hawkins of The Darkness could take And the Anonymous Nobody… in an entirely different direction…

New Model Army’s 17th album is one of their heaviest to date, with frontman Justin Sullivan on visceral form and the songwriting as intense and powerful as ever. An absolute must-buy for fans of the band and a decent intro for newcomers too.

Describing the music of Mild High Club, the brain child of Los Angeles based musician Alexander Brettin, is no easy task but we’ll give it a go: imagine The Beatles at their most psychedelic thrown into a blender with jazz, funk and some of the spaciest synths you’ve ever heard and you’re almost there. But really, you should listen to the track below and experience their full majesty for yourself.

For her 9th album, Britney Spears decided to do something different – at least according to a recent Q&A. We’re not expecting free jazz or anything, but songs like Make Me… suggest this will be a great pop record. Will it have a banger on the level of Toxic though? Here’s hoping…

Hertfordshire rockers The Hunna have been making major waves recently, with singles We Could Be and You & Me charting on iTunes and Spotify and receiving airplay on Radio 1. With the release of 100, their debut album, The Hunna could become one of Britain’s biggest bands – get on board the hype train now.

Pre-order 100 by The Hunna on Vinyl

House of Shakira celebrate their 25th anniversary with Sour Grapes, an album packed with catchy and powerful tunes. Early rumblings suggest its their best since the classic Lint.

Pre-order Moonbathers by Delain on CD

Pre-order Moonbathers by Delain on Vinyl

Pre-order Heroes of Mighty Magic by Twilight Force on CD

Pre-order Heroes on Mighty Magic by Twilight Force on Vinyl

After the sombre Afraid of Ghosts, written in the wake of his father’s death, Butch Walker’s latest album Stay Gold is a return to the raucous country rock of previous records.

Between Waves – The Album Leaf

Between Waves is The Album Leaf’s first album in six years, and their first since the band’s unlikely move to Relapse Records, a label better known for aggressive punk and metal. This is another beautiful collection of synth-driven ambient electronica.

Pre-order Between Waves by The Album Leaf on CD

Pre-order Between Waves by The Album Leaf on Vinyl

A blues side project from Shannon Larkin and Tony Rombola of hard rock favourites Godsmack. A heavier version of the blues, with a slightly darker tone.

As well as new releases, you’ll find 1000s more albums on CD and Vinyl on the musicMagpie Store. Prices start from just £1.19 and you’ll get FREE delivery too!