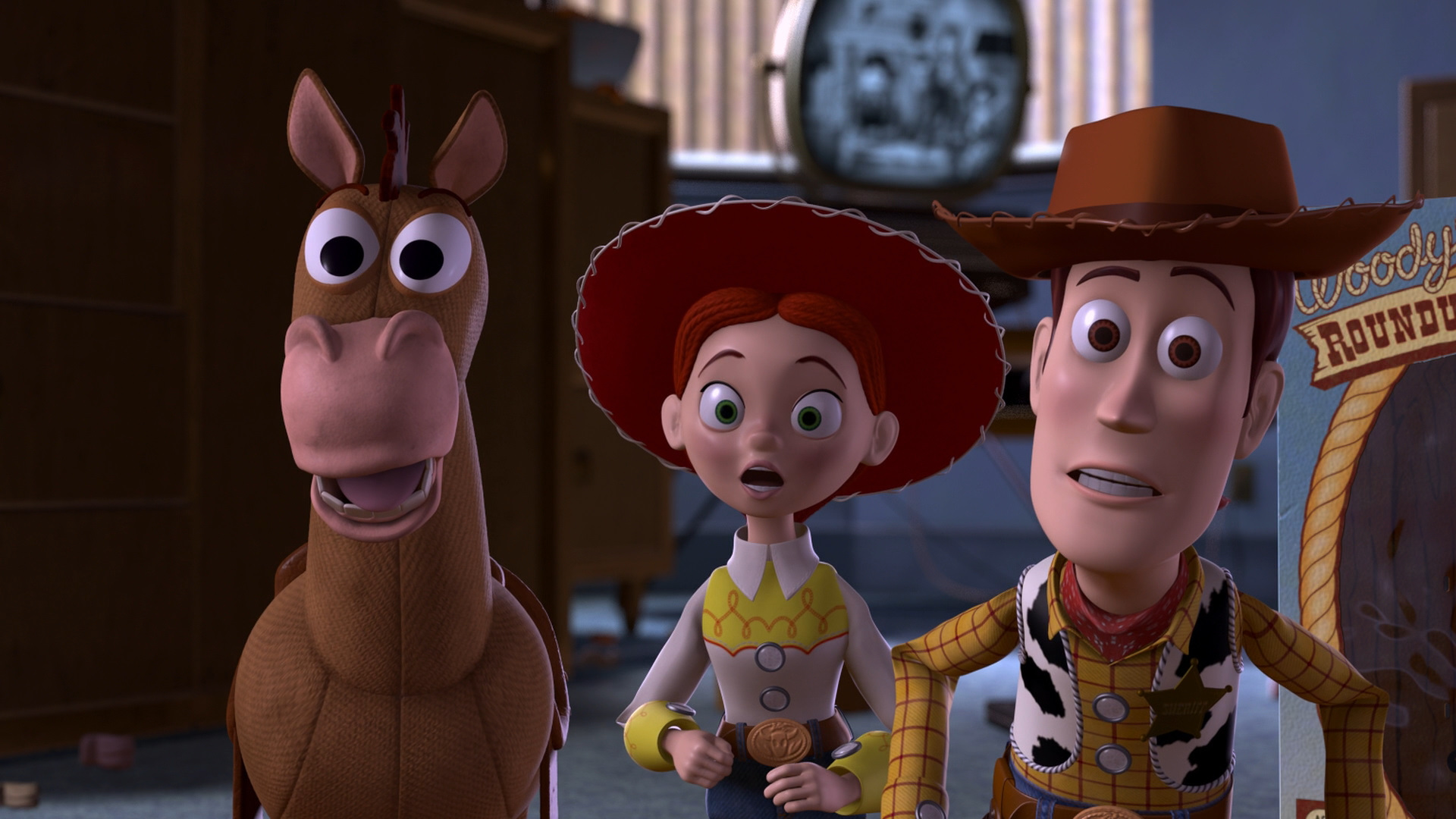 The Walt Disney Company has made childhood classics for decades; they are a staple for generations of kids and adults alike! There is a huge body of work at Disney, dating back to the 1930s, and fans of the films have some pretty crazy interpretations of their films.

Aladdin takes place in the future, not the past

This interpretation notes the Genie, played by the incredible Robin Williams, and his impressions. If Aladdin were set in the past, how does the Genie know who Robert de Niro or Groucho Marx are? The Genie has been trapped inside of the lamp for 10,000 years, meaning the film takes place in at least 10,300 AD. He also notes that Aladdin’s clothes are “so last century”. So, it’s thought that Aladdin takes place in a post-apocalyptic world where only Arabic has survived.

Pixar’s Toy Story is one of the most popular Disney films of the 90s, spurring on a second and third instalment. In Toy Story 2, we meet Jessie, part of Woody’s Roundup Gang. It turns out Woody was a big deal in the 1950s; and he learns that Jessie was given up by her owner – it’s thought the girl Emily who owned Jessie is Andy’s mother. The hat Andy wears to match Woody’s when they play isn’t a Woody hat at all, it actually matches the hat Jessie wears. Could the hat (and even Woody) be a childhood hand-me-down? We don’t know Emily’s surname, nor do we know Andy’s mother’s first name…

Anna and Elsa are related to Tarzan

You can’t have a Disney film without heartache, and Frozen gets theirs in early. Princesses Elsa and Anna of Arendelle tragically lose their parents in a shipwreck… or so we’re lead to believe. There’s an interpretation that the King and Queen don’t die in the sea at all. What’s believed is that the Queen was pregnant when they set off on their travels, and although the ship is destroyed, they wash up on shore. They have a baby boy and go on to live in the jungle before they’re killed by leopards. This leaves their son to be raised by gorillas – as Tarzan was.

Jane is related to Belle

Whilst we’re on the topic of Tarzan, it’s been interpreted that Tarzan and Beauty and the Beast are linked too. Somewhat based on how similar they both look, there is a theory that Jane, Tarzan’s love interest is a distant granddaughter of Belle of Beauty and the Beast. Aside from facial similarities; Jane’s dress sense is similar – Belle’s famous ballgown is yellow, as is the dress Jane dons. They both have eccentric fathers and go on to fall in love with literally ‘wild’ men. If you look closely enough during Tarzan, you can see Terk the gorilla playing the drums on the tea set from Beauty and the Beast, complete with Mrs Potts.

The Up movie consipiracy theory is one of the darker interpretations of a Disney classic, but there is speculation that the film Up didn’t happen at all. Carl Fredrickson, the grouchy old man in Up who is going to lose his house, actually dies in his sleep before he can be put into a retirement home. The balloons on his house help him ascend into Heaven, and Russell the wilderness explorer is his guardian angel. Russell needs a badge on ‘helping the elderly’ – by helping Carl to Paradise Falls (or, Heaven), Russell will earn his wings. We thought the movie was sad enough, but this interpretation takes the biscuit.

Again, this one might just break your heart. Snow White and the Seven Dwarfs’s Prince Charming, who is meant to save her with a kiss, has become the blueprint for her perfect man ever since. It’s been interpreted that he isn’t her true love after all – he is the embodiment of Death. When Snow White first meets the Prince, she’s hanging by a well and is scared of him. Scared because of her close brush with death? Potentially. After she dies from eating the poisoned apple, Prince Charming kisses her and is taking her to the afterlife; the white horse they ride on relates to the ‘pale horse’ in the book of Revelations.

In The Little Mermaid, King Triton has seven daughters and Ariel is the youngest. This is symbolic because each daughter represents one of the seven seas; protagonist Ariel is the Red Sea due to her red hair, Attina is the Bering Sea which is the largest as she’s the oldest and Alana is the black sea due to her black hair. Ariel is also related to another Disney favourite, Hercules. In Greek mythology, Zeus (the father of Hercules) and Poseidon are brothers. Poseidon is King Triton’s father – so Ariel and Hercules are first cousins once removed.

Boo is a witch

The adorable toddler in Monsters Inc., Boo, follows Sulley back to Monstropolis leaving behind her normal human world. There’s a scramble to get her door so she can return, although we all become attached to her. It has been interpreted that when she grows old, she actually becomes the witch in Brave. Mary (Boo’s real name) becomes obsessed with finding Sulley after she returns home. So much so, she uses the limited information she knows about him to try and trace him – namely doors. She travels back in time rather than forward, trying to find magic strong enough to find him. Did you spot the carving of Sulley in the witch’s cabin in Brave?

Jafar is the good guy

This interpretation kind of turns the whole story on its head, but it’s down to the perspective of the narrator. The story of Aladdin is told to us by a merchant who is trying to sell us the infamous lamp (side note: it’s thought the merchant is actually the Genie) so to create a convincing pitch, Aladdin has to be the good guy. Delve deeper into Jafar’s involvement in the story; he could have been much more menacing but isn’t, because he’s inherently good. Jafar’s issues stem from the sultan’s inability to do his job. Agrabah is rife with homelessness and poverty, the sultan is ageing but does not have a male heir to continue the reign, and his daughter has no intention of marrying to save the city. Jafar hypnotises the sultan and tries to arrange marriage between himself and Jasmine to avoid any further turmoil in Agrabah.

Mother Gothel is the Evil Queen

The antagonist in Tangled is believed to be linked to one of the original Disney classics, Snow White and the Seven Dwarfs. There are a few reasons why, and despite the huge gap between production and distribution of the films, the interpretation will definitely make you think. Both women are obsessed with beauty, they look similar in both youth and their old age, and they both become old hags. More intricate details such as their daggers which lookalike, their manipulative by acting as if they are caring when truly they are not and their similar dresses which are dated at the time of each film’s setting.

We hope this got you thinking! Do you need to re-watch these classic Disney films to see these interpretations in action? Sell your phone now and upgrade to a new mobile so you can watch your favourite Disney films in better quality! Get cheap Disney films at the musicMagpie Store and enjoy FREE delivery!

Plus, you can also shop refurbished phones too at the musicMagpie Store!