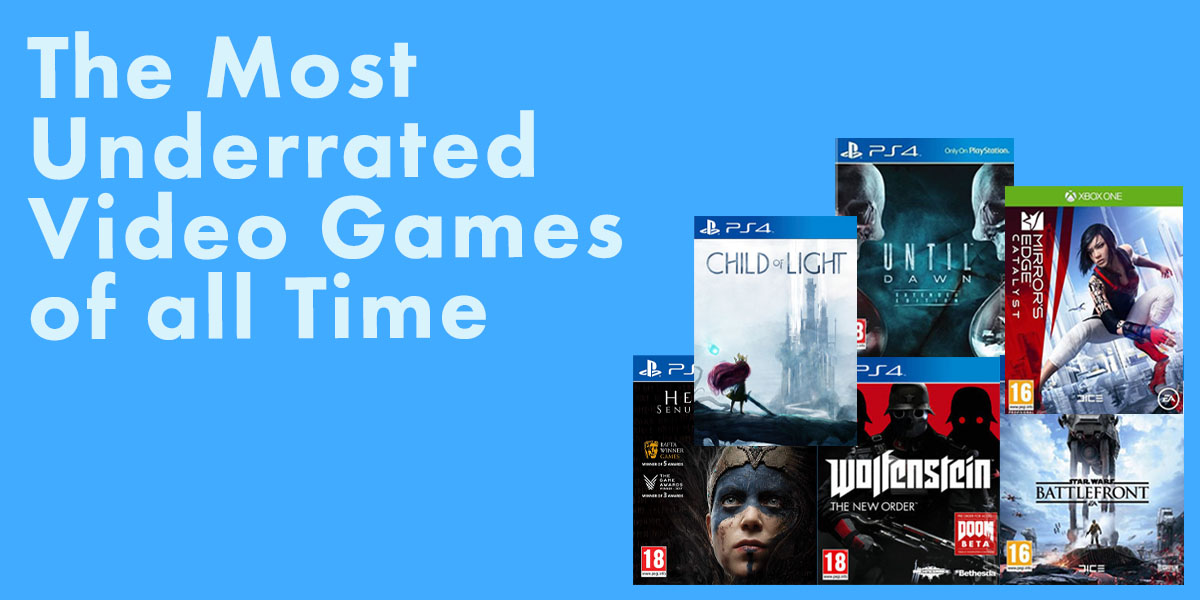 The Most Underrated Video Games of All Time

Video games are just the best, aren’t they? They’re a great way to unwind after a long day of work or gain a sense of achievement when you pass that unbeatable level. They’re also fantastic for playing online with friends or avid fans around the world.

Many releases are critically acclaimed (think Dark Souls, Final Fantasy and Call of Duty to name a few), whereas others just haven’t received the praise they truly deserve for many reasons ranging from bad release dates to unexpected negative reception. This leaves a group of underrated games that are underappreciated and forgotten. But that doesn’t mean they’re not worth playing. In fact, some have serious cult followings that you wouldn’t know about unless you searched hard for them.

If you’re after a game that beats the status quo in its own unique way, why not check out our list of top underrated games below. One of them might just be the best game you’ve never played:

This wouldn’t be a best underrated video games list without including Mirror’s Edge. It’s one of the most cutting-edge and innovative games of its time and one of the first games to be released on the PS3.

It’s unique first-person perspective and parkour-style navigation made it an incredibly pleasing game. Camera movement is synchronous with the main character’s movements – so the faster she runs, the more the camera moves, giving the player a realistic and unique playing experience.

Mirror’s Edge, despite its innovation in the gaming world, still received mixed reviews due to its level structure and length. However, if you’re after a gaming experience like no other combined with a touching story, then this is one to play.

You might be puzzled as to why a popular gaming franchise is on our list of underrated games. Let us explain.

Shadow of the Tomb Raider brings the Survivor is Born trilogy to an end. What we believe stunted its hype, understandably, was its release next to Spider-Man and the much-awaited Red Dead Redemption 2. Whilst it’s poor timing on Crystal Dynamic’s part, Shadow of the Tomb Raider gave its avid fans what they wanted – heavy tomb exploration, a dive into her past, second-to-none combat, hidden tombs and a semi-open exploring environment leaving fans with lots of room for creativity.

Available on: PC, PlayStation 4, Xbox One

Battlefront 2 received a lot of criticism for its microtransactions. Not to mention EA received a lot of backlash in 2017 for its poor Bioware release, leaving Battlefront to seriously take the hit and become a truly underrated game. When you look past this though, you’ll find the gameplay and story is a work of art.

Set after the events of The Return of the Jedi, combat systems were massively improved, as was the narration which made the storytelling element a dream to follow. Its multiplayer setting was highly acclaimed for its rewarding combat mechanics, so if you’re a multiplayer fan, this game is well worth the investment.

Available on: PC, PlayStation 4, Xbox One

Another game that caused controversy for its in-game microtransactions. This, unfortunately, overshadowed it’s impeccable open-world style adventure, giving gamers the option to create Orc armies and so much more.

Enemies and NPCs alike are incredibly detailed, with the latter able to join in and help with your fight too. Its new Nemesis system means you can acquire “Followers”, whose behaviour depends on how you interacted with them. Kill higher level enemies and work up the ranks quicker, or be killed by lower-level enemies and watch as they become a serious threat.

If a post-apocalyptic Soviet setting sounds like your thing, then Metro: Last Light (MLL) is one to add to your gaming arsenal. Taking place a year after the events of the first game (Metro 2033), MLL is heavily credited for its theme for humanity, from wiping dirt and blood off your gas mask to trailing through eerie sewers. It really gives the player terrifying moments of the human condition.

From a game design perspective, it completely nailed its physics engine, considering it’s a 2014 release. It’s one of the first games to not feature your ammo status and simply gives audio and visual cues for reloading, which truly adds to the terrifying nature of the game. Another fantastic feature of MLL is its Karma engine, which ultimately determines how your game will end.

FPS games are in abundance, let’s be honest. But what Wolfenstein offers to the table is truly unique, albeit underappreciated in the gaming world.

A Nazi-ruled alternate reality draws you in immediately. The world is filled with oppression and fear, yet its environment, despite being the Nazi’s concrete dream, is anything but boring. The game exhibits themes of love, revenge and a ton of violence that will send you on a total rollercoaster of emotions. The game caters to those who want to stealth through or bash those Nazi’s faces in and is highly credited for its mechanics, upgrades and every single weapon is extremely useful in your arsenal. So there’s no need to toss away the very first gun you pick up.

Another Nazi-themed game that was highly underrated for its time. Created by the same studio that produced Battlefront, this game is what ultimately led Pandemic Studios to its demise, due to poor sales and sub-par ratings.

We think differently of this game, as do many gamers on popular forum sites. The Saboteur is based in France which is under the Nazi regime, with its entire city painted in dark, sadistic colours which only change once the Swastika is removed from the area. It gives this game a truly dark sense of what it would be like to live under these conditions, but despite its gripping plotline, its TPS mechanic didn’t live up to scratch, meaning gamers couldn’t completely appreciate the artistic nature of this title.

Life is Strange is no new concept, but what makes this game enter our list of underrated games is its exploration of the human condition, again.

Following Max Caulfield, an underrated photography student who has the ability to trigger the butterfly effect by rewinding time, she must prevent a storm that will destroy her town. The game allows you to communicate with NPCs, choose where the narrative goes and even unwind it. What’s truly fascinating is that some “good” choices you make could actually turn out for the worst later on in the game, so your choices really are critical!

The game as a whole received amazing reviews but was criticised for its lip-synching, character script. It’s never really talked about anymore despite being cited as one of the best interactive story games of the generation.

Senua’s Sacrifice (SS) is another game that explores the human condition – more importantly, themes of mental illness. SS was critically acclaimed and won many awards, but gamers have cited gameplay as draining at times due to the intensity of the themes it touches upon. Safe to say, it’s not a game for the faint-hearted.

You are an 8th century Pict warrior on a quest to save your lost love in Norse Hell. You’ll fight your way through other-worldly demons, solve puzzles and watch (as well as listen) to the psychosis Senua experiences throughout her journey. Whilst it’s not an easy game to stomach, it nailed mythological and psychological themes perfectly.

You are Mae, a college drop-out tackling the working world back in their hometown. Night in the Woods is an explorative game with point-and-click side missions, as well as opportunities for Mae to speak to locals and know their story. It’s a game that ultimately teaches the lesson that we take responsibility for our adult lives in our own way. Most popular titles don’t “aim” to have a deeper meaning or moral at the end of the story, which may have been a reason why this game didn’t make as many headlines as it deserves.

Though this game received fantastic reviews and positive ratings, why don’t we hear about it more often? Or more importantly, why aren’t there more games with a beautifully deep narrative that critics claim the industry needs more of?

Child of Light follows Princess Aurora in another dimension. On a mission to save her Father from a debilitating illness, you are accompanied by a firefly that helps you fight your way through mysterious creatures. The game explores loss and heroism in equal measure, but more importantly, stunning visuals from Ubisoft said to be inspired by Studio Ghibli. Interestingly, the game is inspired by real locations such as her Duchy in Carniola, Austria, and exploration of the supposedly lost content of Lemuria, which is featured in the game’s main explorative quests.

Until Dawn is truly unique. Branded as an interactive drama, it follows a group staying at a lodge on Blackwood Mountain. But like every “Cabin in the Woods” plotline, something truly terrifying goes down that the group needs to solve to save their lives and others.

Unlike most interactive games that give you the opportunity to re-select your actions to determine a different ending, Until Dawn allows the player to gain a “pre recognition” of what could happen as a consequence of their selection, meaning there’s greater control to gain the outcome you desire.

Despite this, the game prevents players from reloading a previously saved file, meaning the only way to change the player’s choice is to restart the game or to continue to the end and start a new game. The game did receive some criticism for long silences and strange jump-cuts which distorted the flow of the game.

Fancy getting one of these games to try out for yourself? Buy Games from musicMagpie Store! Or if you want to trade an old game in for another – trade games with musicMagpie for cash!